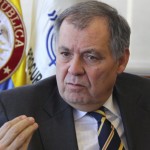 Colombia’s Inspector General has confirmed the setting up of national and regional commissions and sub-commissions for transitional justice in the event that the peace talks currently taking place in Cuba come to fruition.

As these transitional justice commissions take shape, various congressmen consider it to be another case of Inspector General Alejandro Ordoñez sticking a “spoke in the wheel” for the ongoing peace process between the Colombian government and the country’s leading rebel group, the FARC.

Ordoñez is a critic of the peace talks and recently caused controversy over dismissing the mayor of the capital Bogota over irregularities in a trash collection reform.

The commissions and sub-commissions were created under the radar of public attention starting from June this year. The concrete structure and responsibilities of these entities were confirmed in a resolution this December, with the aim being the promotion of justice for human rights violations in the eventual post-conflict period and to “guarantee the victims of the conflict’s right to the truth, to justice and a full recovery.”

Aided by the fact that Ordoñez is known to be one of the main opponents to the talks, however, the move has raised fears that this could interfere with current efforts by the government and the FARC to put aside their differences and come to some kind of agreement.

Numerous members of Parliament have accused Ordoñez, who in October stated that the true intentions of the FARC in The Havana was to “force the state into submission and obtain absolute immunity,” of overstepping the limits of his duties to society and attempting to monitor and supervise public policies.

Such is the case for Senator Juan Carlos Avellaneda, who believes that the Public Minister’s strong stance against the peace talks overlooks the subtle differences between standard criminal justice and the more delicate measures that must be taken during the post-conflict period.

“Knowing the Inspector General, who has declared himself an enemy to the peace process, I cannot see anything positive in these moves by the Inspector General’s Office, because they will most certainly confuse traditional justice with transitional justice,” Avellaneda told El Espectador on Sunday. “We’re going to have to expect another spanner in the works of the peace process, which needs to understand that a certain amount of justice must be sacrificed in order to obtain a high amount of truth that will help consolidate a process of memory and reconciliation.”

Senator Camilo Romero also believes that Ordoñez is a “political player” who is “using and abusing his authority” to throw fresh obstacles at the peace process taking place in Cuba.

Nonetheless, other members of parliament believe that the measures only fulfill the legal obligations of this public institution, whose duties are to the protection of its citizen’s rights.

Clara Rojas, former manager of Fundacion Pais Libre and lead candidate for the Liberal Party in the House of Representatives, shares this mind-set.

“Whenever these commissions follow their vocation in the defense of public interest, and the Inspector General in charge is as neutral as is necessary, I consider this form of monitoring to be important,” Rojas told El Espectador. “Regarding kidnapping, for example, the Inspector General’s Office along with the Ombudsman’s Office may assemble support teams for the victims, who generally have difficulties in accessing justice.”