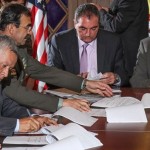 The Chargé d’Affaires from the United States’ Bogota embassy signed an agreement Wednesday with representatives of Colombia’s National Police and   Ministry of the Interior aimed at improving security in rural Colombia.

According to a statement released by the parties, the project appropriates funds to support police and improve local conditions in four rural municipalities scattered throughout central and northern Colombia.

The project calls for modern surveillance systems to be installed, to help local police monitor and investigate crime.

“Today we can see important results in the society due to enforcements of the security forces and social investment,” said the mayor of one of the municipalities, Hugo Arce Hernandez

This is the first shared-funding agreement of this kind between the U.S. state department and the Colombian government, and authorities say they will be looking to the project as a limited experiment of its potential success in terms of larger investments.