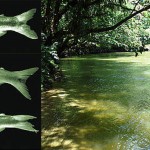 Colombia’s National University on Monday announced it had found three new fish species close to the Magdalena river valley in northern Colombia.The fish species, between 8 and 9 centimeters in size, were captured in high mountain streams in the towns of San Carlos and San Rafael.

A study involving the examination of the bone structure of the fish concluded the fish did not belong to any known specie.

Associate Professor of the Department of Forest Sciences, Nestor Mancera and Director of the Laboratory of Ichthyology at Quindio University, Cesar Roman determined the classification of the species to be the genus Hemibrycon, belonging to the family Characidae under the order of Characiformes.

Mancera told the news agency of the university that Colombia still has a high number of fish that has yet to be studied, but because the fish are not of economic value or ideal for the human diet they are often not studied. He noted that the some, however, have an important role in the ecosystems that they inhabit.

The species function as pest control and as commercial species’ feed, so they do have a critical role in the neotropical high mountain ecosystem. The discovery of new species is currently not considered important however because it does not appeal to economic interests, Roman told the agency.

Location of the find