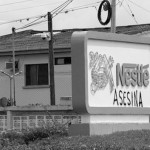 A Nestle worker and activist of the food union Sinaltrainal has been killed on Saturday in suspected paramilitary attack in the town of Bugalagrande in western Colombia, according to media and human rights groups.

Oscar Lopez, who worked for Nestle for more than 25 years, was killed in a bar by unknown gunmen on Saturday night.

Lopez, as an active member of the union, had been involved in the long lasting dispute about union rights between Nestle and Sinaltrainal.

In the protest, some activists had started a hunger strike in October, which was paused momentarily because of threats, but resumed on November 5th.

Last Friday, several activists received threatening text messages saying, “you still are bothering Nestle, now there will be no more mercy! We are going to chop you up. Death to all communists of Sinaltrainal!”

The message was signed by the name “Los Urabeños,” one of the country’s most notorious neo-paramilitary groups.

The murder constitutes a climax in the persistent labor conflict between Nestle and Sinaltrainal, which escalated after Nestle withdrew from negotiations a few months ago.

According to Swiss human rights group Multiwatch, Nestle has since then been pressuring workers to join a rival union and trying to delegitimize the work of Sinaltrainal.

This incident comes only two weeks after a report was published that declared the failure of a bilateral plan which was set up between the U.S. and Colombian government three years ago to alleviate the serious labor problems in the country.

After the resumption of the hunger strike last week, Multiwatch has written an open letter to Nestle’s Chief Executive Paul Bulcke calling for a return of the company to the negotiating table and to protect their workers from future threats.

Also, according to Multiwatch, a group of 20 Swiss congress members have written a letter to Nestle expressing their concerns and asking for a meeting with representatives of the company.