Nearly 900 Colombian Guerrillas Have Surrendered in 2012

The Colombian Defense Minister claimed that 887 guerrillas have demobilized so far this year, most of them members of the FARC, as this rebel group embarks on peace talks with the government. 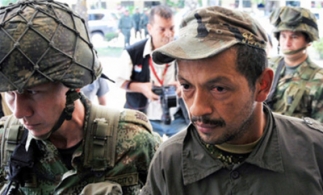 Colombian Defense Minister Juan Carlos Pinzon announced the figure on October 10, and said that some 12 percent of those who surrendered were middle-ranking commanders with more than 12 years in the ranks of the guerrillas, reported Vanguardia.

Nearly 90 percent of those who demobilized were from the Revolutionary Armed Forces of Colombia (FARC), according to the government.

The figures include five FARC members from the Teofilo Forero Mobile Column, out of a group of 10 who reportedly surrendered to the army earlier this week.

These numbers are down from 2010, when the government said that 2,831 guerrillas had demobilized.

However, official figures on demobilization must be considered in the context of the government’s intense propaganda assault against the guerrillas, which has included sending teams to deck out jungle trees in December with sparkly lights spelling out the message “Demobilize, at Christmas everything is possible.”

There are currently estimated to be some 8,000 armed members of the FARC, meaning that they would have lost 10 percent of their force over the last 10 months, if the government’s figures are correct. However, the guerrillas’ support networks are thought to contain many more people, at least three times that number.

The surrender of members of the Teofilo Forero Mobile Column is an especially heavy blow for the guerrillas, as this group is an elite special forces unit within the rebel army, which has been behind some of its most high-profile attacks, including the 2003 bombing of El Nogal social club in Bogota.

The paths followed by these demobilized rebels gives an idea of what could be in store if the leadership of the FARC makes a peace deal with the government. Preliminary talks between the government and the rebels have been taking place for several six months, and Colombian President Juan Manuel Santos has expressed hope that a deal will be reached quickly, once formal talks begin next week in Norway.

However, a mass demobilization of the entire rebel group would present much bigger challenges than the processing of small groups of deserters. The Colombian government’s handling of armed groups handing over their weapons has ranged from the broadly successful 1990 surrender of several thousand members of the M-19 guerrilla group, a former member of which is now mayor of Bogota, to the widely criticized paramilitary peace process of 2004-2006. Many of more than 30,000 members of the Autodefensas Unidas de Colombia (AUC) either returned to crime or never left it, forming new gangs known as the BACRIM, which are now responsible for much of the country’s drug trade.