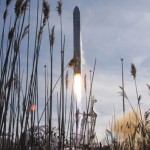 The first satellite consisting more than 50% of components made in Colombia was launched into orbit by US space agency NASA on Thursday.

The satellite by the name of UAP SAT-1 was launched on Thursday from the NASA’s Wallops Flight Facility in US state Virginia after the initial launch that was scheduled for Wednesday had to be delayed because of high levels of space radiation.

According to EFE, 65% of the satellite is made up from components made by Sequoia Space in Colombia, providing the crucial parts like antennas and solar panels.

Andres Alfonso, engineer and director of Sequoia Space, referred to the project as “milestone” for the aspiring aerospace industry of Colombia, stating that “the technological development made in South America is becoming reality,” as he was quoted in an interview with the news agency.

Alfonso also stressed the importance of this event in terms of tech transfer between South American states, claiming that projects like these are the main driving force behind the growth of the aerospace industry in the region.

The blueprint and operative system of the UAP SAT-1 satellite was designed by a research team of the Alas Peruanas University. It is the third Peruvian satellite in the orbit and the first of his kind launched by the NASA, according to a press release by the university.

The cubic satellite which measures about 10cm and weighs less than two pounds was sent to the International Space Station (ISS) from where it will transmit data regarding its status and environment once placed in orbit with the help of a robotic arm.

While the launch of this satellite was more of an academic experiment, the future objective of the project will be to obtain information about environmental issues like global climate warming and the establishment of a potential early warning system, according to EFE.

The history of the aerospace industry in Colombia, which is one of the eight South American countries to have satellites in the orbit, is closely related to the above mentioned Sequoia Space company.

According to EFE, it all started in 2007 when four young Colombian engineers came together to form a research team at the Sergio Arboleda University in Bogota in order to initiate the first Colombian aerospace project.

With the help of Pumpkin Incorporated, a US company that provides components for micro-satellites, these young pioneers around the age of 25 were able to build the first ever Colombian satellite to be launched into space in 2007.

Inspired by the success of the satellite project called Libertad 1, the four scientists founded the company Sequoia Space which developed into one of South America’s leaders of the aerospace industry in a relatively short period of time; an industry which traditionally has been associated with leading economic powers like the US, Russia or the European Union.

According to founding member and director Alfonso, the lack of faith in the technological capacities of local aerospace enterprises to take on projects of this nature has been the largest obstacle in the development of the upcoming business, as he was quoted saying in an interview with EFE.

Other members of the team stressed the economic potential of the aerospace industry in South America, saying that the challenge would be to “achieve credibility” in a technological sector that is yet to be developed to approach the status-quo of Europe or the US.

A it seems, Sequoia Space is on a good way to do so, considering their latest success and their future prospect of working with the Colombian Air Force on a new project called FacSat1 which will be launched in one to two years from now, according to the same interview.