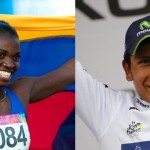 Nairo Quintana, 23, is Colombia’s top cyclist and recently took home first place prizes at the Tour of Burgo and Tour of the Basque Country. He also took home the polkadot jersey in the Tour de France.

“I am so excited that I have few words. First let me thank my team. Also thank you Colombians for allowing me these pretty moments,” said Quintana.

Caterine Ibarguen, 29, is an Olympic medalist, taking home a silver medal for the triple jump at the 2012 London Olympic Games and 1st place for triple jump in the World Championships, a first for Colombia.

“Thank you to God, to El Espectador, to my family and to those who voted. It has been a great year, I have realized one of the greatest desires to be a world champion. I will continue working for Colombia. I am also very proud to share this prize with Nairo,” said Ibarguen, who won the award for best female athlete of the year in September.