Naked, women protested against the Police for reports of sexual violence

In a video ciculating on social networks, a group of women undressed in Bogota's Parque Nacional and stood with posters in front of policemen. The gesture is a demonstration against sexual violence reported in at least 18 cases during the national strike.

QCOLOMBIA – At least 18 complaints of sexual violence allegedly committed by the police have been reported, mostly on social networks, within the framework of the protests of the national strike, according to the organization Temblores. 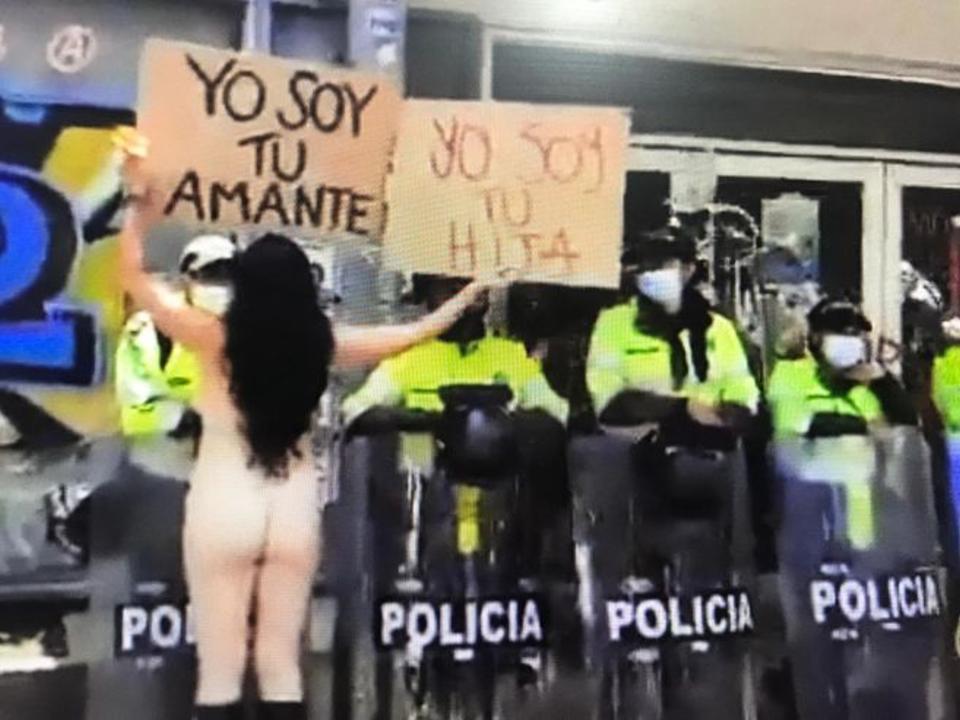 The most recent cases were registered last week in Popayán, Cauca, where a 17 year old and an 18-year-old girl reported being victims of sexual violence in the Chirimía sector. One of these complainants allegeldy committed suicide after the events, although Legal Medicine has not yet confirmed the cause of her death.

As a gesture to reject the violence reported mostly by women, several women met in the Parque Nacional, in Bogota, totally naked in front of the police officers and raised signs with phrases such as “Yo soy tu amante”, “Yo soy tu hija”, “Me has hecho el amor”, “Yo te he hecho el amor” and “Mi útero fue tu primer hogar” (I am your lover, I am your daughter, You have made love to me, I have made love to you, and My uterus was your first home).

Hundreds of people applauded the action of the protesting women.

# ParoNacional19M✊ | Protest action by women in the Bogotá National Park. They denounce the more than 20 cases of sexual abuse committed by the Police against women in the framework of the National Strike, and registered by organizations that defend Human Rights. pic.twitter.com/XiIG2vzsCs
– Colombia Informa (@Col_Informa) May 19, 2021

Reports of sexual violence, mostly for sexual harassment and abuse, have been made in cities such as Cali, Bogotá, Palmira, Popayán and Acacías. In the latter, for example, an Esmad police officer was recorded on video telling his partner to let a group of women pass on a street blocked by them.

“Let her pass and do what you want!” Shouts the uniformed official.

Lina Porras, a Temblores researcher of police violence, explained at the time to El Espectador that “this expression is sexual violence and shows that women’s bodies are understood as territory to exercise power, to exercise authority, and they are understood as objects that can be possessed, violated.

That ‘do as you want’ means ‘I have all the authority and power to do what I want with your body,’ “Porras told this newspaper. Another woman in Cali said that a police officer “groped” her while she tried to reprimand her.

Sexual violence not only includes rape, but includes all those actions of a sexual nature that are perpetrated without the consent of a person, from physical invasion of the body to those that do not involve any physical contact. The Inter-American Commission on Human Rights (IACHR) strongly condemned the acts of sexual and psychological violence against adolescent women, allegedly committed by members of the National Police in the context of the demonstrations in Popayán on May 12.

“Sexual violence committed by state agents, in abuse of their power and taking advantage of the vulnerability of the victim, is a form of torture. The IACHR urges the State of Colombia to investigate the facts with reinforced due diligence and punish those responsible, reinforce the mechanisms for responding to violence against women, and provide training to people who are members of the public force,” said the rights body humans on his Twitter account.

The CIDH strongly condemns the acts of sexual and psychological violence against adolescent women, allegedly committed by members of the National Police in the context of the demonstrations in Popayán.