Music and dance for the dead: Afro-Colombia rituals 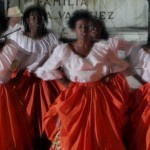 Every society has its way of mourning. In the west, people are accustomed to solemn, grave rituals that amplify the sorrow of loss. In Colombia’s Afro-descendent population, funerals are an explosion of emotion, in part melancholic but also joyful, expressed in an array of music, song, and dance.

Spread primary along the country’s Pacific and Caribbean coasts, Colombia’s Afro communities are characterized by a great diversity of funeral and burial practices, in which participants at times scream in pain and at other times leap with joy.

“Music and dance help, and have always helped my ancestors to transcend, to evolve,” said Jenifer Chaverra, a member of the Wangari Afro-contemporary arts group, in an interview with Colombia Reports.

“It was their way of catharsis.”

When an adult dies in Colombia’s Pacific Afro-descendant communities, a choir of harmonic prayers and deep, solemn chants called “alabados” is sent up to the heavens, asking that the suffering of their loved ones be eased, and that their spirits be delivered to God for judgement.

In “guali” ceremonies, groups of women perform traditional lullabies and songs to send deceased children to the next life. These rituals of the southern Pacific region require few or no instrumental accompaniment, and narrate the child’s ascent to heaven. It is believed that children become angels once they die.

The child’s cadaver and the women wear white as a symbol of the child’s purity, while men typically sit aside, drink and play cards or dominoes.

“Afro-Colombian cultures approach funerals very differently,” the guide says. “They show the deceased that they are happy.”

The white funeral-wear is one of the more obvious departure points from western tradition, and one of the many ways this joy manifests in child funerals.

“If the soul of the child sees you cry, it’s wrong. You cannot cry,” an educational worker at Medellin’s San Pedro Cemetery tells Colombia Reports.

For Afro-Colombian communities, the souls of the dead are present and watching the entire ritual. Showing signs of sadness may displease the dead child and prevent it from entering heaven.

This is perhaps more emphasized in the northern Pacific region, where women and men dance the “pataleta” to celebrate the lives of lost loved ones.

In these energetic, playful scenes, wind instruments and reverberating drums accompany the “bambazu” dancers, who chant their joyful goodbyes to the body of the baby as it is passed from person to person.

In the “bullerengue“ ceremonies of the Colombian Caribbean, drummers and musicians accompany light-footed female dancers. These particular performances bring out another side to the rituals, as the seizure-like movements are said to represent the suffering of lost life. Often in Afro-Colombian rituals, people will go into a trance-like state when dancing.

It is believed in these communities that while the spirit disappears once the body perishes, the soul continues to watch its relatives until nine days after its death, during which period the funeral and final burial take place.

As opposed to other ceremonies in which joy is the focus, in bullerengue, “the more you show you feel pain, the better it is,” the educational worker explained.

It’s one example of the myriad ways Afro-Colombian culture resists classification as a homogenous unit, which is why Chaverra places a great importance on studying and learning from the various Afro traditions practiced across the country.

“Because death is transcendent, it can be understood from another perspective,” said Chaverra, who explained that ”history [in Colombia] is of the white, the rich,” and excludes the country’s rich Afro heritage.

It is precisely that exclusion that has shaped the Afro-Colombian communities’ traditions and way of life, starting from the times of the Atlantic Slave Trade and continuing on through centuries of neglect and abuse.

In this way, the same way it has faced and survived hundreds of years of suffering, Colombia’s Afro population confronts the pain of death, transforming it into a celebration of the afterlife.