Colombian authorities have confiscated nearly 4 tons of cocaine that they say was produced by the FARC, which would be a major financial blow to the guerrillas, though their representatives denied any connection to the seized drugs. 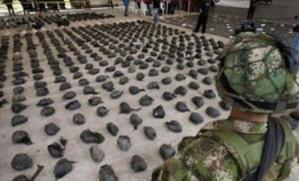 Following three weeks of intelligence work, 150 troops flew to the jungle-covered zone in helicopters and descended by ropes, reported El Tiempo. Around eight suspected guerrillas fired on them before fleeing, according to the newspaper.

The seized cocaine packages would be worth around $22 million on the Colombian market and up to $90 million when taken abroad. Mora said the drugs would have been exchanged with Mexico’s Sinaloa Cartel for arms, weapons and explosives, reported newspaper El Heraldo, and that they had Sinaloa markings printed on them.

Ricardo Gonzalez, alias “Rodrigo Granda,” a FARC spokesman in peace talks with the Colombian government in Cuba, dismissed the allegations the laboratory belonged to the guerrillas, reported El Tiempo. “This is laughable, man, we are a very serious, responsible, political-military organization,” he said. “You’re not talking to any drug traffickers here.”

The 4 tons of cocaine is a massive seizure and, if the drugs did belong to the FARC, it would represent a major blow to the guerrillas’ finances. Last year, the biggest single haul in Colombia was 1.5 tons.

Colombian Army assertions attributing criminal activities to the FARC must always be treated with caution, but the guerrillas are known to operate cocaine mega-laboratories like this, and Cauca is one of their major centers for drug production and trafficking. Rodrigo Granda’s claim that the FARC are not involved in drug trafficking is simply false.

There have been reports of links between the FARC and Mexican cartels for a number of years, particularly the Sinaloa Cartel. Mexican groups are increasingly building links with the Colombian groups in order to buy coca paste at the source, and get a bigger share of profits by getting involved lower down in the distribution chain.