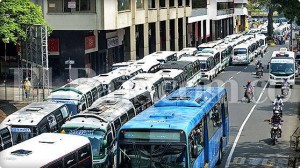 Delays of up to one hour in the movement of feeder routes and secondary lines of the MIO massive transit system in the east and south of the city, were report Monday morning, this due to a protest by operators of the GIT Masivo that began at 5am.

The protest in front of the yards of the MIO in th area of Valle del Lili on the south side lasted about 2 hours, enough to choke the city’s transit.

The protest delayed the circulation of MIO buses to a number of routes headed north from the yards.

In recent days, Metrocali, the operator of the MIO, said the GIT Masivo is the largest operator not to pull out of circulation 125 of 230 the old buses as agreed.

GIT says it is in financial problems, the company’s income is not sufficient to meet operating costs.