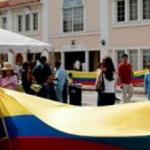 Colombian electoral authorities have announced that more than half a million Colombians living outside Colombia are eligible to vote during March’s congressional elections said nation radio Tuesday.

A total of 214 polling stations will be distributed in 63 countries around the world to facilitate the electoral process for those Colombians residing outside the South American nation.

They will reportedly have a full week starting on Monday March 3 to submit their votes at the nearest polling station between 8 am- 4 pm local time.

Caracas, Venezuela has reportedly the largest expatriate population with about 58,000, or roughly 10%, of eligible voters.  Madrid, Spain is next with almost 28,000 Colombian nationals and Miami in the United States is third with 24,000 potential voters.

QCOLOMBIA - Venezuela is to reopen its border with Colombia, Venezuelan...
Read more
- paying the bills -