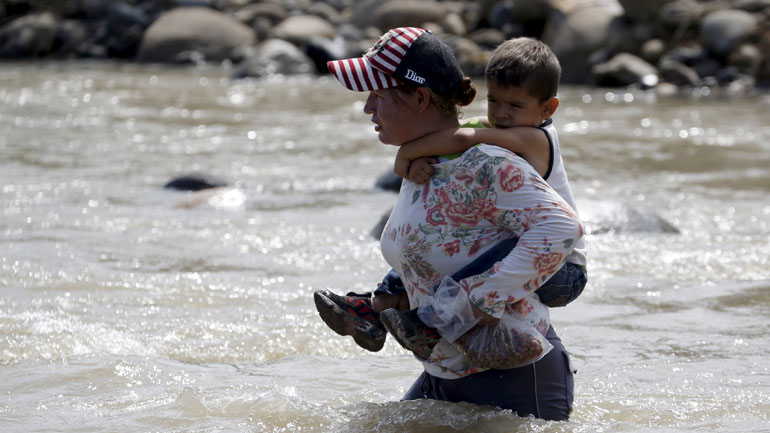 More than 4,200 Colombians have fled Venezuela in response to Venezuela’s closing the most important border crossing and deporting over 1,000 Colombians.

As of Wednesday 1,088 Colombians, including 244 minors, have been deported from Venezuela after three military personnel were attacked in the border town of Simon Bolivar de San Antonio while patrolling for contraband smugglers.

However, the forced deportation is not the only thing causing a humanitarian crisis on the border.

The closing of the border by Venezuelan President Nicolas Maduro and fears of abuse by the Venezuelan military have spurred a much larger number of Colombians to voluntarily flee the neighboring country with thousands of other Colombian allegedly still in Venezuela waiting to do the same.

According to the United Nations’ Office for the Coordination of Humanitarian Affairs (OCHA), 4,260 people have crossed over the border in this manner. The organization noted that the difficulty registering these cases causes lapses in the response, increasing the vulnerability of this population.

The self-deportations are being registered in the town of Villa del Rosario. However, OCHA has identified an urgent need to strengthen the points of registration for those coming across the border voluntarily.

Mayor Donamaris Ramirez of the border city Cucuta believes that the number of Colombians voluntarily leaving Venezuela will increase in the coming days.

“Just in San Antonio (Venezuela), which is right by the Tachira River, there could be between 5,000 and 7,000 frightened Colombians that want to escape,” he told press.

According to Ramirez, the border closure and deportations are part of a misguided attempt to combat contraband smuggling. “The people [the Venezuelan government] are attacking are not the ones they are looking for.”

“They all come with their televisions, refrigerators, and old fans. They are poor families. This shows the big mistake of Maduro’s government. If they were involved in smuggling, wouldn’t they have, at least, modern and expensive appliances?” said the mayor.

According to Ramirez, the largest ally in contraband rings along the border is the Venezuelan National Guard itself.

“The smuggling of fuel and other products is handled even by Venezuelan generals who regulate import quotas…but without doubt, it was consented to.”

Venezuela’s decision to massively deport Colombians living in the Tachira state comes amid a major economic crisis and only months before the country takes to the polls to elect a new National Assembly.