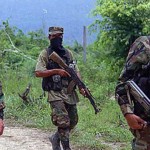 More than 400 incarcerated Colombian paramilitaries are scheduled to be released before December 2014 after having served their eight year sentences as a result of submitting to Colombia’s Justice and Peace Law.

Four hundred forty-two former members of the now-defunct paramilitary organization, the AUC, are close to freedom after serving sentences of eight years  imprisonment as a result of the Justice and Peace Law signed during the government of former President Alvaro Uribe, reported Colombia’s Caracol Radio.

Among those who would be free come the end of the year are criminals responsible for some of the most heinous acts of Colombia’s decades-long internal conflict. The former paramilitaries are responsible for notorious massacres at the sites of Macayepo, El Salado, Mapiripan, El Caño Chengue, and Caño Jabon with a death toll that today stands at around 400,000 victims, with mass graves still being uncovered.

Of the 4,163 members of the paramilitaries who demobilized in 2005, about 2,000 have already been excluded from the benefits of the Justice and Peace Law, 2,357 are already released and before December, 442 more could join them.

InSight Crime has reported that their release could affect Colombia’s criminal underworld with some of the soon-to-be-released possibly joining up with newly formed neo-paramilitary organizations and others attempting to regain control of territory they used to control.

The 2005 Justice and Peace Law gave paramilitary combatants and leaders access to fixed and dramatically reduced sentences in exchange for their weapons and full compliance with justice investigations. Those who made use of the statute would serve no more than eight years in prison, provided they divulged any knowledge they possessed of criminal activity or crimes committed against humanity to investigators.

The AUC was one of the primary actors in the armed conflict that still continues in Colombia today. Between the mid 1990s and early 200os, the group was responsible for thousands of human rights violations, including murder, kidnapping, torture, rape, and forced displacement on a massive scale.

Officially, the AUC demobilized in 2006. Many of its key members, however, have since gone on to form offshoot neo-paramilitary organizations, which currently control the country’s international drug trade and continue to engage in acts of political violence.

Of the several hundred paramilitary combatants who turned themselves in under the Peace and Justice statute, only 16 have been formally prosecuted.

The post More than 400 former Colombian paramilitaries to be released from jail by December 2014 appeared first on Colombia News | Colombia Reports.