‘More than 20,000 to demobilize in event of peace with FARC and ELN’ 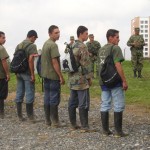 Colombia’s government said Wednesday that in the event of a demobilization of rebel groups FARC and ELN, between 20,000 and 25,000 members could demobilize.

Alejandro Eder, the director of the governmental Colombian Agency for Reintegration (ACR), told Spanish press agency EFE that “we hope to demobilize at least 20,000 or 25,000 people,” adding that this could be even higher.

This number is significantly higher than the 9,000 fighters both guerrilla organizations have according to the country’s Ministry of Defense.

According to Eder, this apparent discrepancy is because in the event of a demobilization not just the armed fighters lay down arms, but “you have to add the support structures” of civilians who carry out intelligence work in support of the military units.

“In a military organization not everyone is a fighter. There will always be a network of support, militia members, armed people who serve as the intelligence network, or social activists, who are people who logistically support the organization,” the government official told EFE.

In order to be able to eventually process such large number of ex-guerrillas and successfully reintegrate them into society, the ACR director said his organization is strengthening its presence throughout the country. According to Eder, this is “a matter of size for a short period of time.”

The official in charge of the ongoing desertion of individual FARC fighters, warned the administration of President Juan Manuel Santos to tread carefully when it comes to organizing the demobilization of rebel groups and not think in “easy” or “universal” solutions.

Each demobilizing rebel is a person “with dreams and ambitions” which requires that “for each one we create a space where each can develop as an individual in a democracy where he has the right to do what he wants.”

This customized support is especially important to prevent former rebels from returning to arms, said Eder, who stressed the importance of extra attention for mid-level commanders who proved to be more vulnerable for recidivism during the demobilization of paramilitary organization AUC.

In the demobilization of the paramilitaries that took place between 2003 and 2006 thousands of mid-level commanders and fighters went on and formed neo-paramilitary groups that have since taken over parts of the AUC’s former criminal structure.

The FARC and the government are currently negotiating the rebels’ involvement in drug trafficking after already having agreed on an agrarian reform and the FARC’s future political participation. Once an agreement on drugs is found, the negotiating teams will proceed to discussing the FARC’s demobilization which will include reintegration programs.

The post ‘More than 20,000 to demobilize in event of peace with FARC and ELN’ appeared first on Colombia News | Colombia Reports.