Miss Colombia Set To Compete For The 2013 Miss Universe

Born on March 9, 1992, the 21 year old model grew up in Samanes de Guadalupe a low middleclass neighborhood in Cali, Valle del Cauca, Colombia third largest city and is the daughter of Maria Consuelo Roldan de Aldana (a Housewife) and Hector Aldana (a lawyer) she is the youngest of five children. 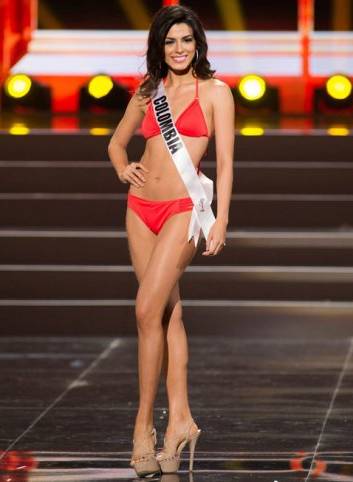 In Monday’s dress portion of the contest, Aldana wore a dress made by Colombian designer Alfredo Barraza and Hugo Jamioi, an artisan from Colombia’s Arawaca indigenous community. Titled “Jilguero del Guatapari,” the dress features flowing black and yellow “tail” and pays homage to the iconic “jilguero” songbird, which lives along the banks of Guatapari River in northeastern Colombia.

In the Monday event designed to highlight the national heritages of the 86 contestants, Aldana premiered her dress alongside performances by Colombian salsa, cumbia and currulao dancers,