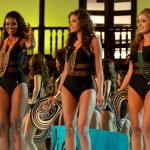 Miss Colombia beauty pageant, one of the most-watched annual events in the South American country, will crown this year’s winner today.

The announcement of this year’s Miss Colombia will be the highlight of the ongoing festivities for Cartagena’s 202nd Independence Day. The weekend’s festivities include several days of dance, parades and music as citizens celebrate the date that the Caribbean city became the first one to declare Independence from the Spanish in 1811.

At the event, Colombia’s new beauty queen will be revealed during a ceremony at the convention center “Julio Cesar Turbay Ayala de Cartagena” at 8:30PM.

A jury, composed of different personalities from the entertainment world, will choose one out of 21 beauties from each state.

Through the past two weeks, Colombia Reports has covered in a series of four, introducing each of the candidates.

Candidates from the states of San Andres, Atlantico, Cauca, Risaralda and Valle are considered to be favorites to win this year’s version of the annual beauty pageant – but all of the 21 still have the chance to impress the jury with their qualities today.

As the “representative of the Colombian women” and the country’s “big heart,” the future Miss Colombia is expected to promote cultural and social events with her “happiness and positivism.”