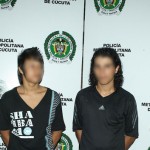 The National Police’s director of Citizen Security, General Jorge Nieto, announced that in 2013 figures for juvenile delinquency increased by 4.6% in comparison to 2012, meaning 473 more arrests than the previous year.

The 13,000 children and youths were captured on charges such as robbery, personal injury, homicide, extortion and crimes against freedom, integrity and sexual development.

Nieto commented that to the Police these statistics were a warning sign, as it was worrying that adults are involving and using these minors in committing crimes.

The most prominent city for juvenile crime is the Colombian capital of Bogota, in which 3,253 minors were arrested over the past year. Cali saw 1,211 minors detained in 2013, with Medellin and Bucaramanga close behind with 723 and 677 arrests respectively.

Nieto stated that the Police had carried out more than 118,000 preventative actions against this form of delinquency through their program “Open Your Eyes (“Abre tus Ojos”). The program focuses on helping young children and teenagers in vulnerable situations.

Around 186,000 vigilance and control actions were also carried out in public and educational establishments.

Despite the preventative measures being taken by authorities, however, 2014 has already seen 17 minors and 15 women arrested for carrying illegal weapons, according to the director of the National Police, general Rodolfo Palomino.

Palomino specified that 18% of these detainees claimed that the confiscated weapons did not belong to them, but that they were keeping them for a third party.

The post Minors arrested in Colombia rose to 13,000 in 2013 appeared first on Colombia News | Colombia Reports.