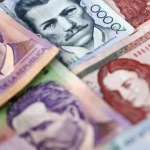 As the debate over Colombia’s minimum wage increase for 2014 continues, workers’ unions called for an 8% increase, while the business lobby called for a 3.3%  increase.

Colombia’s Minister of Labor Rafael Pardo said to local media to expect a 4% increase in the minimum wage again this year.

Workers’ unions were disappointed by the government minimum wage raise increase in 2013.

In addition to their proposal for a 8% increase, the workers union also called for a 12% increase for a transportation subsidy for minimum wage workers.