Metallica coming to Colombia in 2014 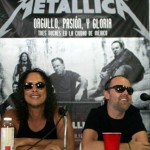 The show will be “by request,” meaning that concert attendees will have a chance to select the set-list to be performed by the band during the show.

Metallica will kick off their Latin American tour in Bogota before moving on to Ecuador, Peru, Argentina, Paraguay, Chile and Brazil.

Metallica was formed in 1981 in Los Angeles, CA, and due to their fast tempos and aggressive music style, have been credited as one of the founding bands of the genre of Heavy Metal.