“Around here it used to be very dangerous, a lot of people getting killed, and the journey downtown was in trucks; there were no buses,” says Juan David Herrera, a resident of Medellín’s northeastern neighborhood of Santo Domingo. “It would take an hour, and in the morning traffic much more. But since the metrocable came, it’s different. Now you’re more likely to get robbed in Poblado or Laureles (the city’s more well-to-do areas).” 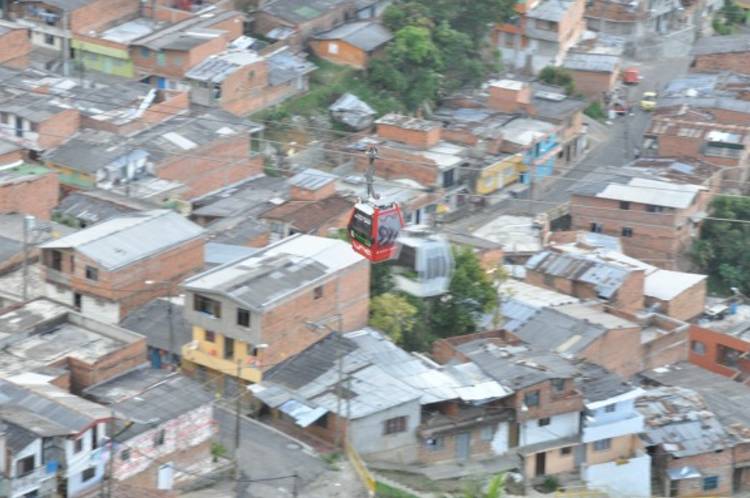 Medellín’s gondola was the first of its kind to be integrated into a municipal transit system. Photo credit: Jorge Lascar via Flickr

Rarely in resilience planning does one find a magic bullet. But Medellín’s pioneering gondola system, the first of its kind in the world, comes pretty close. Opened in 2004, the gondolas have been credited with helping solve all sorts of urban problems: tamping down on Medellín’s notorious crime, reducing its traffic and brightening the financial outlook of the city’s poorer residents – a safety-mobility-economic trifecta.

Now, Medellín is expanding its pioneering system with a tramline that will extend it east of the city, up the valley along two more gondola lines. By creating this multi-modal system to serve its residents’ diversity of transit needs, the city is building redundancy and capacity, making the whole system stronger.

Medellín has all the transport dilemmas common to many developing world cities: clogged arteries, potholed roads, smog from a ballooning armada of cars. But the city also faces a distinct challenge because of its geography. Situated at the heart of a valley, its sprawling shanty towns, known as barrios, have crept up the mountainsides to provide a spectacular sight for onlookers, and a nightmare for city planners.

The steep and narrow helter-skelter streets that weave between the brick and cinderblock houses make regular bus service to the highest points of these barrios impossible. Before the first gondola line was opened to serve the northeastern barrio of Santo Domingo, it was estimated that some residents spent up to four hours a day traveling to work in mainly informal downtown jobs.

“They were basically cut off,” says Medellín’s Secretary for Mobility Dr. Omar Hoyos, explaining how these areas’ rapid and unregulated development resulted in infrastructure incapable of sustaining the communities’ transport needs.

Talk of solving this problem with gondolas began around the turn of the century, and it’s now been almost a decade since that first high-wire line was opened in August 2004. At that moment, Medellín became the world’s first city to have a gondola system integrated into its wider mass transit network. Since then it has added two more lines, opened in 2008 and 2010, and their palpable successes have garnered interest from press and city governments worldwide.

Among the system’s many benefits has been a decline in the crime that blights the city’s poorest zones. By the time the first line was opened, Medellín was already shaking off its reputation as the world’s most violent city, registering a 40 percent drop in homicides between 2002 and 2003. In 2004 that downward trend continued, and studies have since shown the direct contribution of the gondolas. In “intervention” areas served by the gondolas between 2003 and 2008, there was an 84 percent reduction in the homicide rate. The security infrastructure that accompanies the lines, which includes guards and lighting, has also reduced common crimes and property theft. 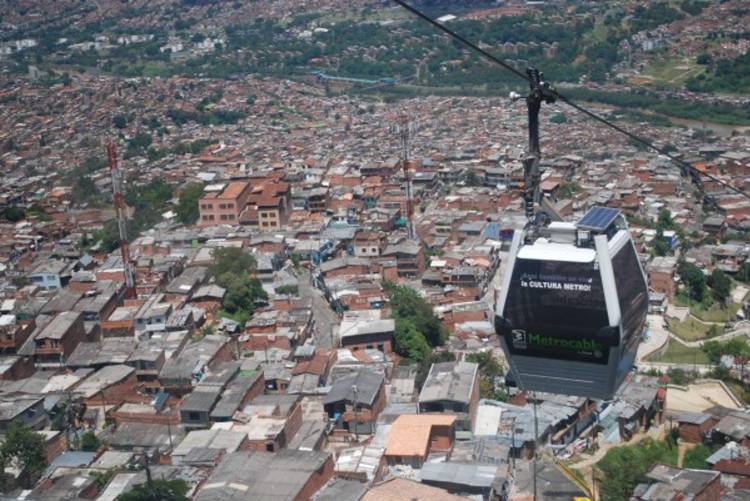 The first gondola line cut to one hour what used to be a four-hour roundtrip commute for some residents of the barrios. Photo credit: Metro Medellín

The gondola reportedly saves its users up to 50,000 pesos ($26) a month in travel costs. In a city where most informal workers do not even earn the monthly minimum wage of 589,500 pesos ($313), this is a significant amount of money. For Governor of Antioquia Dr. Sergio Fajardo, who was mayor when the first gondola line opened, the reduced travel time – with the journey from Santo Domingo to the center now taking around 30 minutes – is as crucial to the enrichment of peoples’ lives as the money being saved. Sports facilities, education parks and libraries built around the stations also promote social inclusion among young people and have been credited with aiding in crime reduction.

“This area has changed 100 percent,” says Nelson Alzate, who has sold fruit outside the Santo Domingo gondola station for the past three years. “It used to be violent, but the line has brought all this,” he says, gesturing to the buzz of people shopping and socializing outside the station. “Now this area is full of workers and families and people trying to make a life.”

It is in this context that the metro system continues its development, with the Ayacucho Tramline, named after the main street it travels along, set to extend the system east of the city and shoot steeper up the valley along two more gondola lines.

The idea of a tram was first floated during Fajardo’s 2004-‘07 mayoral term, with formal planning beginning in 2008 and construction starting this year. “We did the analysis,” says Juan Camilo Gómez, a civil engineer for Metro, the transport body jointly owned by the city and regional government. “We saw the tramline was the best solution to our needs” in terms of cost, projected traffic volume and geography. 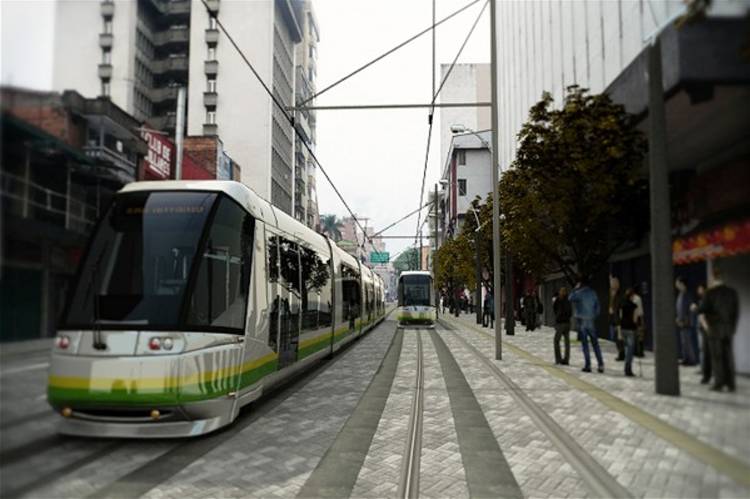 The tram will complement the gondola and is the newest leg of an integrated system that will eventually link Medellín to all nine of its satellite cities. Photo credit: Metro Medellín

According to Gómez, the 4.3 kilometer Ayacucho Tramline will cost $320 million, largely funded by credit from the French government. “For infrastructure projects, these are low costs, economical costs, but they have great social impact,” he says. “We aim to bring all of the urban and social change which accompanies the arrival of cable technology transport – exactly what we did in Santo Domingo.”

The development of social and educational space around stations will also continue along the new routes, which Gomez says are “a pretext to return to the people what has been stolen from them (by violence and crime): public space.”

Meanwhile, as Mobility Secretary Hoyos underlines, the Ayacucho Tramline is just the latest leg of an integrated system that will link Medellín to all nine satellite cities that make up the Aburrá Valley Metropolitan Area. Hoyos says the next leg, a 13.5 kilometer tramline extending into the southwest of the city, is planned and awaiting financing to begin construction.

According to Hoyos, when the Ayacucho Tramline opens in 2015 it will be part of a strategy to oversee one million journeys on government-provided public transport each day – a 67 percent increase over the current 600,000. Through the use of gas and electric power, it also fits into a scheme to prioritize pedestrians and environmentally friendly travel.
“The metro is the umbilical cord (of the city),” says Hoyos, and part of an overall plan to create a city “which thinks more about the people than the machine; a city of public space, where citizens can move safely.”