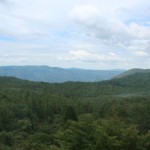 One moment, you have a spectacular bird’s eye view of Colombia’s second largest metropolis of Medellin as your cable car crawls over the crest of a mountain ridge, and the next, you are suddenly gliding over the top of a an ethereal, vast, and beautiful forest with no city in sight. Welcome to Parque Arvi.

This ecological park is 1761 hectares of pine and eucalyptus forest located in Medellin’s eastern mountains in the Santa Elena district.

The crisp, cool air and relaxing vibe make it hard to believe the park is only 20 minutes away by the public transit cable car from Acevedo Metro station.

Once the private holiday retreat of Medellin’s elite, since 2009 Parque Arvi has been converted into an ecological preserve that welcomes the public.

Feast for the senses

After the spectacular views from the Metrocable, you are dropped at the visitor’s center in the heart of the forest and are immediately greeted with the hustle and bustle of a farmer’s market.

Here you can try artisanal wines, sample traditional Colombian snacks or buy fresh fruits and vegetables. The produce comes from the surrounding towns.

It is easy to get caught up sampling the food and drink, as most things cost between 50 cents to $4, but you are here to breathe in the serenity of your surroundings, not to eat.

The last tour of the day, which sets off at 3pm, is the most laid-back of the day. For the more adventurous, Parque Arvi also has lake hikes and camping.

Pause along the trail just for a moment and you can hear frogs croak, hummingbirds buzz and songbirds sing.

Be sure to come prepared for Medellin’s famous showers as it’s hard to predict when you will be joined in the afternoon by the gentle patter of rain on the path.

Fear not though, for your guides are always ready. They will gladly gather a handful of moss for you and squeeze clear drinkable water out.

The moss filters the rainwater before it runs into the streams, the lichen here clear the air, and the forest provides a respite for people and animals alike.

Medellin’s climate is known for being “eternal spring,” so Medellin’s magic forest can be visited year-round.  Parque Arvi is open from 9am-6pm, Tuesday to Sunday. It also opens on holiday Mondays.

Cost and how to get there

Park entrance is free, but the Metrocable to Arvi is just over $2 (or 4,200 Colombian pesos) each way.  You can catch a train or a bus from anywhere on the Medellin Metro System and go to the Santo Domingo Metrocable station on the same ticket and then buy a separate ticket to get up to Arvi.