Medellin to take down partially collapsed flats in controlled explosion 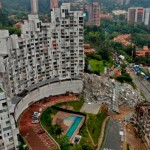 Medellin announced on Thursday that it will demolish the apartment building complex that partially collapsed in October killing twelve people.

The implosion is scheduled for February 18 and will mark the next step in the gradual demolition of the Space Towers after the tragedy on October 12 last year.

Tower six of the newly constructed Space towers in the Poblado neighborhood collapsed due to errors in the construction. All occupants in adjacent blocks were subsequently removed.

After extensive studies by the Andes University at request of the Medellin council and the city’s mayor, Anibal Gaviria, the administrative department of disaster risk management ruled the entire complex to be unsafe. The construction company, CDO, appealed the decision and as of yet no date has been set for the implosion of towers 1-4.

A safety area of 100 meters will be in place from 9 PM on February 17 until 5PM on February 18 and public transport in the area will be suspended during this time. According to Gaviria “the implosion itself will only take seven seconds but more time must be given to ensure the safety of the site and surrounding areas.”

The luxury complex, with apartments selling from between $100,000 and $265,000, was built by construction company CDO; owned by a former governor of Antioquia, Alvaro Villegas, and was designed by architect Jorge de Jesus Aristizabal.

The implosion will be achieved by placing 75 kilos of explosives within lift shafts.