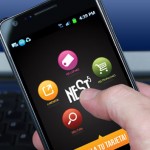 A team of young Medellin-based entrepreneurs continued the rollout of their new brand loyalty website Thursday, aimed at helping Colombian brands understand their customers and their buying patterns.

The virtual equivalent of the traditional loyalty card, “Nest5″ is a multi-platform application that offers customers rewards for their purchases.

In an interview with Colombia Reports, David Arroyaye explained that Nest5 has already partnered with dozens of Colombian companies looking to improve their marketing.

“Maybe you have a hamburger restaurant,” said Arroyave, a co-founder of Qtag Technologies, the tech company that designed Nest5, “your customers use our card and give us information via their social media (which we allow people to opt out of). From that we can tell you ’70% of your customers love tennis’ or ‘this particular type of music.’ We can then say to you, ‘maybe you should have a promotion that involves this band.’”

“We started Qtag almost three years ago with a different idea and then we moved on to ‘big data’ (using a large amount of information in useful ways). We did a test with 15 brands last year here in Medellin.”

The tests went well, said Arroyave, though the relative inexperience of some of the companies with internet data tracking did cause some early difficulties.

“We found the market here isn’t used to big amounts of marketing data. So we don’t give them mountains of data and tricky graphs, but we do give them suggestions based on all that information. We say to the companies and brands, ‘You need to make your users love you’ and then we give them the tools to do it.”

The rollout comes as another startup company from Medellin, received a sizable ”angel” investment — a personal investment from a major donor.

Qtag has received a similar contribution from a European investor and Arroyave said they will use it to expand Nest5 to 200 brands and 20,000 users.

At 27, Arroyave is one of three co-founders in the tech-company, along with his older brother Daniel (30) and Julian Restrepo, 25, both of whom are also are Medellin natives.

The three young men are a part of the growing tech scene in Colombia’s second-biggest city, which is beginning to style itself the Silicon Valley of Latin America.