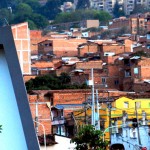 Medellin’s House of Memory Museum, dedicated to creating historic memory of Colombia’s ongoing armed conflict, opened its doors to the public for the first time this week.

“The original idea for the museum, Casa de la Memoria, comes from the victims [of the armed conflict],” museum Director Lucia Gonzalez Duque told Colombia Reports. “The authorities of Medellin created a secretary of attention for victims about five years ago and out if its cooperation with victims’ organizations the idea of the museum was born.”

Remember to not repeat

The museum, the first in Colombia dedicated solely to the armed conflict, was designed as a space to reconstruct a history shrouded in violence and promote peaceful co-existence, according to Gonzalez. “Remember to not repeat,” she said, is the guiding principle behind the museum.

The opening exhibition focused mainly on Medellin’s violent past, and will remain up for the duration of Memory Week.

One of the works on display showed photos of the still missing victims of the notorious Operation Orion, during which state forces and paramilitaries captured a neighborhood of Medellin seeking to drive out local left-wing militias, killing and “disappearing” numerous civilians in the process.

“We think that art is a very powerful medium through which you can communicate with people and sometimes touch them in a more profound way than for example through intellectual or rational means,” said Gonzalez.

Underlying the museum’s first exhibition, however, was the ongoing questions regarding the government support behind it.

The museum’s first official opening ceremony was held in 2011, but in the intervening time, the public has not been allowed to enter.

Gonzalez claimed that the delays stem from construction issues that still need to be resolved, but local media have attributed the situation to ongoing political neglect.

Lack of political will

The museum, located in the Bicentennial Park in the center of Medellin, was constructed mostly during the term of former Mayor Alsonso Salazar. Once Salazar left office, the impetus to complete the project reportedly left with him.

In an open resignation letter earlier this summer, former museum Director Carlos Uribe wrote, “I have to confess, that I feel lonely, very lonely, being criticized by politicians and because of the lack of leadership regarding this topic [the museum] within the working group [of the mayor’s office].”

A reduction in the museum’s budget from roughly $7.3 million in 2012 to $2 million in 2013 and $1 million each for the next two years has also fueled the argument that the museum is not a priority for Salazar’s successor, Anibal Gaviria.

Gonzalez herself mentioned that though the museum was authorized for public access during Memory Week, the Mayor’s Office still has not officially approved its completion.

“At this point the Mayor’s Office has not yet officially green-lighted the building, but they authorized us the use it and in a few days it will be approved,” said Gonzales, who also said that a new co-financing deal signed by the Mayor’s Office could improve the museum’s budget situation.