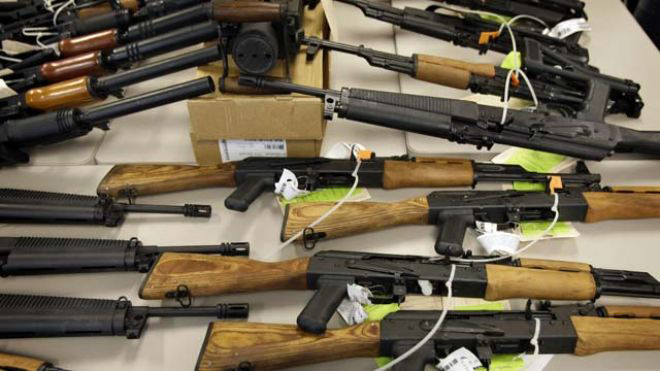 Part of a cache of seized weapons displayed at a news conference in Phoenix. (AP2011)

Guns walked in the ATF operations “Castaway” and “Fast and Furious” have found their way to drug dealers in Colombia’s second-largest city, according to Colombian daily El Tiempo.

The paper’s investigative unit reported Tuesday that the ATF sent a commission to Medellín to check the serial numbers of guns walked by the ATF against weapons found after the arrest of a leader of the Oficina de Envigado cartel — and some of them matched.

The Colombian police confiscated scores of weapons after the arrest of Ericson Vargas, alias “Sebastián,” and his brother, alias “Frank,” of the Oficina de Envigado cartel. (The cartel’s name refers to a municipality bordering the city of Medellín.)

Of those weapons, two rifles were originally part of the ATF’s controversial gun walking program, as well as 14 Five-Seven pistols, the police source told El Tiempo.

It is common for politicians and others with security risks to use armored cars in Colombia, where a uprisings by guerrilla groups and violence from paramilitaries and drug traffickers have plagued the country for decades.

Authorities in Colombia are now investigating whether Five-Sevens found in the capital of Bogota and the coastal city of Barranquilla also came from the ATF programs.

The guns likely arrived in Colombia from Mexico’s Sinaloa cartel, as collateral for shipments of coca, according to El Tiempo.

Through the “Fast and Furious” program, the ATF permitted some 2,500 illegal guns sales from 2009 to Dec. 2010 in Arizona, hoping to track the arms to drug cartels in Mexico. The program was suspended after one of the guns was found at the murder scene of U.S. Border Patrol Agent Brian Terry.

The ATF lost most of the guns it allowed to be sold under Fast and Furious.