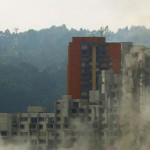 Following a tragic accident in which part of a luxury residential complex in Medellin collapsed last year, one of its towers was imploded on Thursday an unexpected seven minutes earlier than planned.

At 08:53 AM, tower five of a Medellin apartment complex that partially collapsed last October, killing 12 people, was brought down in a reportedly unannounced controlled explosion.

In apparent violation of protocol, no alarm bells rang before the early implosion, which took place seven minutes before it had been scheduled at 9 AM.

People watching the scene reported that “the implosion caught us completely by surprise,” although it is possible that the alarm did sound but was not strong enough to reach the media observers.

While the implosion occurred apparently too early on Thursday, the initial demolition of all five remaining towers of the complex was actually scheduled for mid February, but was delayed for undisclosed reasons.

Some called the chaotic demolition a continuation of tragedy, others say that in the six seconds it took for the building to be brought down, a chapter has finally been closed.

“Hopefully this will serve to make sure that these situations will not happen again in the future,” civil engineer Luis Gonzalo Mejia told El Colombiano newspaper.

“Rather than being the end this could be the beginning, so that from now on we might be able to build a friendlier city, a safer city, a city in which we can live in peace of mind.”

Though the city will not easily forget the painful memories left by the avoidable deaths at Space residential complex, this is a step forward for the complete demolition of the remaining four towers, which has yet to be announced.

“The urgent decision needs to be made to totally demolish all [four towers], as is obligatory by law,” the engineer said.

The luxury complex – built by construction company CDO with apartments in the range of $100,000 and $265,000, is owned by a former governor of Antioquia Alvaro Villegas and designed by architect Jorge de Jesus Aristizabal.

The implosion has been repeatedly delayed in the past. It was set off by placing 75 kilos (165 pounds) of hydrogel explosives in the columns of the first floor of the tower, and executed by construction company Demoliciones Atila Implosión S.A.S.

People living within a 100 metre radius of the complex — located in the affluent Poblado neighborhood of Medellin, were advised to evacuate their homes. Those who chose to remain were told to close their windows and doors, and remain in the house from 7 AM to 12 PM.

Tower six of the Space complex collapsed on the night of October 12, 2013 after being evacuated when severe faults were found in its construction.

The 22-floor building fell with workers still inside. All residents of the remaining blocks have since been removed.

Like Mejia and the disillusioned former Space residents, many hope that both Colombian authorities and construction companies will respect their responsibilities to citizens in ensuring that such fatal shortcomings will not cause such human and material loss in the future.