Mandela as the face of UN peace campaign in Colombia 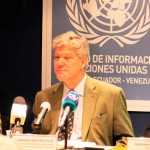 Nelson Mandela and Mother Teresa will be the key figures in a UN campaign to promote peace in Colombia.

The United Nations representative in Colombia, Fabrizio Hochschild, announced on Thursday that that the “Peace is Mine” initiative aims to promote peace in the country through the iconic use of these “two huge global figures.”

The campaign — which is expected to kick start in early 2014 — will take the form of short films and be present on both big and small media platforms.

The aim is to try and spur peace initiatives in the country, and raise awareness in the support of the current peace talks taking place in Cuba between the FARC and the Colombian government.

Hochschild believes that 2013 in Colombia was marked by “the tangible possibility of reaching a solution to the armed conflict,” and that raising awareness amongst the masses is critical in this process. According to the UN representative, in order for the struggle peace to be successful the country’s mentality needs a major turn-around.

“It’s not enough to surrender arms if people don’t surrender their preconceptions,” he said.

Voice-overs will impersonate the two peace-keeping legends, playing with the idea of what they would say to the people of Colombia if they were here today.

Recently deceased Mandela will represent a bastion of hope in the battle against racial discrimination in Colombia, saying the following:

“There are things that appear impossible until they are achieved, but peace cannot become the impossible, because with peace we become bigger than what we really are and the difference in color, race or ethnicity are purely differences.

“Peace depends on what each and every one of you do. Live in peace thinking of your children, of their future and show that you too can say with pride: ‘peace is mine.’”

Mother Teresa’s words would promote good will within society:

“Many believe that a miracle is needed for there to be peace. Peace begins with a smile. Smile to those who don’t want to see you smile. A smile gets a smile in return and peace gets peace in return.

“That which unifies you is greater than your differences; say from the bottom of your hearts that peace is mine.”

The post Mandela as the face of UN peace campaign in Colombia appeared first on Colombia News | Colombia Reports.