Famous Management Guru and mentor to Fortune 100 CEOs Ram Charan was in Medellín for the recent WOBI World Leadership Forum. He spent time with Finance Colombia’s executive editor Loren Moss where they discussed a wide range of topics from digital disruption and The Attacker’s Advantage to how countries like Colombia, or even countries where big petroleum finds were recently announced like Suriname and Guyana can avoid the resource curse and make the leap from resource-based economies to knowledge-based economies. 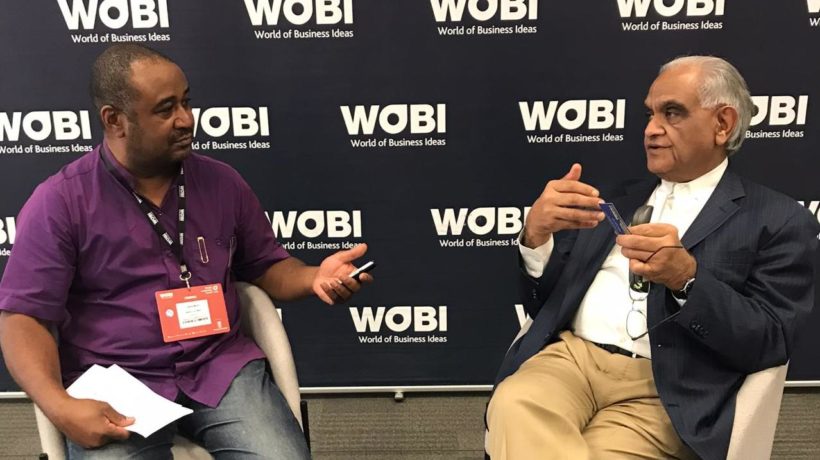 Ram Charan: Yeah, yeah, so the competence is number one, that you create internal mechanisms to sense—use antennas, to sense what new trends are coming. You survey today: who is creating something new? Will that become the future? We don’t know, but you try to figure out who’s creating it, and that tells you “outside in.” That tells you if that particular new thing does become big, then you have future back so if you get my book, Attacker’s Advantage the first three chapters are on it.

Loren Moss: That’s interesting because we see—Yesterday it was announced that Intel who completely missed out, and they admit that they missed out on mobile phone technology; they didn’t take that seriously or make chipsets for that; now, with 5G coming they just announced an alliance with the Taiwanese maker MediaTek, and they are taking seriously the next 5G not so much in traditional cell phones but in devices because the idea now as you know with 5G is that there will be no more need for ethernet; every device is connected wirelessly rather than: there are mobile devices and there are desktop devices…and so it looks like where they may be missed an iteration of the future, of evolution, at least in their sector of technology, they have learned their lessons and they’re saying let’s not get caught behind like Blackberry did for example or Nokia did, and it sounds like what you’re saying is “make sure that your company is the disrupter not the disrupted…or is that different?

Ram Charan: No, no, this is very good, so I happen to know what you’re saying about Intel. Intel’s CEO was a non-technology guy.

Loren Moss: This is after Andy Grove. More recently.

Ram Charan: Andy Grove’s successor was a professor, manufacturer. His successor was an economist by background. He was an assistant to Andy Grove. He was not a technology guy. He missed it. Then came another one, and he had his personal problems, he got fired. Now you have Bob Swan, who was a CFO back then, and he took a year to see whether he wants that job and now he’s trying to catch up.

Loren Moss: Is that dangerous? Because Andy Grove and Gordon Moore, these guys were technology people, they were excellent at business when they came out of Fairchild, they knew the technology. You know Jobs, Steve Jobs is famous for not being an engineer, but he was technologically competent. A lot of people now have doubts about that current leadership saying that if that’s a company that stakes its claim on product leadership, there have been no new products since Jobs’ death. And…

Ram Charan: No, be careful. First, we should not dwell on degrees.

Ram Charan: You can learn that. I used to go in 1978 and coach these three geniuses: Andy Grove, Gordon Moore, and Bob Noyce. They were a $200 million-dollar small company. They learned it. They grew into it. And so it’s a leadership mindset to figure it out, but they can recruit the best people to help them, so in the case of Apple people don’t know this, it should be, that you have a trajectory of a product line, in this case I would say to you the iPhone. An iPhone and an iPad are very related.

Loren Moss: I have them both right here!

Ram Charan: At some point it becomes mature stage. Now, they will, I predict, convert that into “product-as-a-service, so you will be able to get this product with a zillion apps and be able to pay a monthly fee. It’s going to happen.

Ram Charan: And the price of the phone will come down as a result, because 7 billion people will be willing to use it. And what people don’t know is that Apple has moved into health care, and I believe they have the best strategy, so Tim Cook has positioned Apple into the world’s largest market space.

Loren Moss: And that’s a growth space too, positioned for long-term growth.

Ram Charan: And they will use these devices. They now have devices that have been approved by FDA, and they are using data for it. The watch is a device we don’t need anything else, to be able to monitor and give you notice, and use the data the FDA approves..

Loren Moss: I think is amazing the combination of things like IoT (Internet of Things), with things like the artificial intelligence behind tools like Siri or Alexa, or now, Google has one as well. I know a company in Boston, Orbita Healthcare that is coming out with IoT devices that interact with the user to help in cases like Alzheimer’s…

Loren Moss: I think it’s a fascinating time and I want to ask how countries like Colombia can take advantage of these changes. 100 years ago, India was a colony and today India is a global power, you’ve got ArcelorMittal, you’ve got Tata Group, you’ve got Infosys. Tata has bought up all the iconic British brands, and so roles have reversed, haven’t they? And it’s also I think, different than their neighbor like China; is that India is known as a knowledge center, it has a knowledge economy. People might think of things being manufactured in China, but they think of India for IT Outsourcing. Colombia is trying to complete in that realm, obviously it’s much smaller, what can we learn—and you’ve seen it, the whole process—maybe not before when it was a colony but after.

QCOLOMBIA - Colombia has been roiled by nationwide, anti-government protests for...
Read more
- paying the bills -