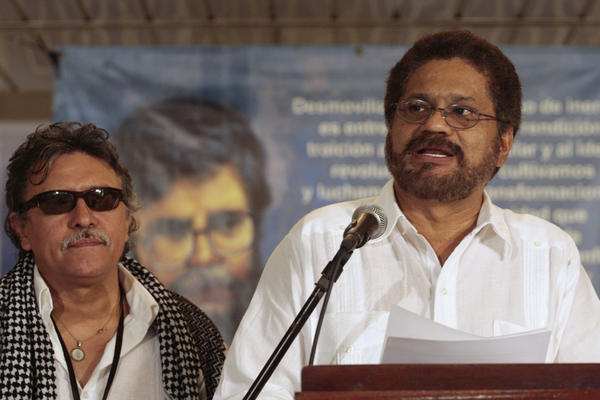 (CSM) A landmark agreement between leftist FARC rebels and the Colombian government over how the guerrillas could transition from violence into politics marks a crucial turning point on the road to end this country’s 50-year internal conflict, though many pitfalls remain.

Negotiators for the Colombian government and the Revolutionary Armed Forces of Colombia (FARC) who have been meeting in Havana for a year, announced the partial agreement on political participation, which would take effect only once a broader agreement to end the conflict is reached.

On its own, the agreement is groundbreaking and forms the basis for future peace, says Christian Voelkel of the International Crisis Group, because it’s the first time the FARC has publicly agreed to divorce violence from politics, and the government recognizes and accepts the FARC’s political aspirations.

“This agreement forms the backbone of constructing a sustainable peace,” Mr. Voelkel says. “The process is really about tuning opponents to the political system into stakeholders in it.”

This is the second draft accord reached in the negotiations, following a deal on rural development in May. The announced agreement also means there is no turning back for either party, Voelkel says.

Previous peace negotiations broke down before any significant accords were reached. The most recent attempt was called off in February 2002, after four years without significant progress on any negotiation points.

“The costs of exiting for both parties at this point are prohibitive,” he says. For the FARC, walking away from the peace talks now would mean losing the only gains they have achieved in terms of better land distribution and having a shot at power, says Voelkel. And for the government of President Juan Manuel Santos, who will likely run for reelection next May, a breakdown in talks would be a political and electoral disaster.

In a joint communiqué from Havana, the two sides said they had agreed on mechanisms to ensure a broad participation in politics for all opposition movements, including any that might emerge from the peace deal.  “Today’s agreement represents a new democratic opening,” said Humberto de la Calle, the government’s chief negotiator.

The agreement on political participation also calls for the creation of temporary congressional districts for areas hardest hit by the conflict, which generally overlap with the areas where the FARC have the most influence over the civilian population. The statement did not lay out details of which areas would be included nor how many seats it could add to the legislature, but local media has speculated it could be 11.

Jorge Restrepo, director of the Bogota-based Conflict Analysis Resource Center, says it is unclear how many seats demobilized FARC fighters could hope to win. “We don’t have a clear idea how electorally viable the FARC will be as a political movement, but I suspect it’s more than many Colombians think,” Mr. Restrepo says.

However, a public opinion poll by Vanderbilt University’s AmericasBarometer that specifically measured perceptions of the peace process among residents of Colombia’s war zones hints that the FARC may not fare very well. More than half of respondents to the survey, which was released Wednesday, said they considered themselves victims of the conflict. Sixty-five percent said they disapprove of the FARC creating their own political party and just 6.7 percent said they would consider voting for a demobilized guerrilla in mayoral elections scheduled for 2015.

Joining the political fray is “a risk the FARC are taking,” Restrepo says.

The announcement on political participation came just days before Mr. Santos must announce whether he will seek a new four-year term in elections next May. With approval ratings just below 30 percent and heavy criticism from ultraconservative detractors who say Colombia should not be negotiating with “terrorists” – as they refer to the FARC – the announcement of progress in the peace process should give him a much needed image boost.

In a televised speech Wednesday night, Santos ruled out any possibility of suspending the talks during the election campaign, an idea that he himself had floated. “When we are advancing, when results are being seen, it’s not the time to stop. On the contrary [it is time to] accelerate.”