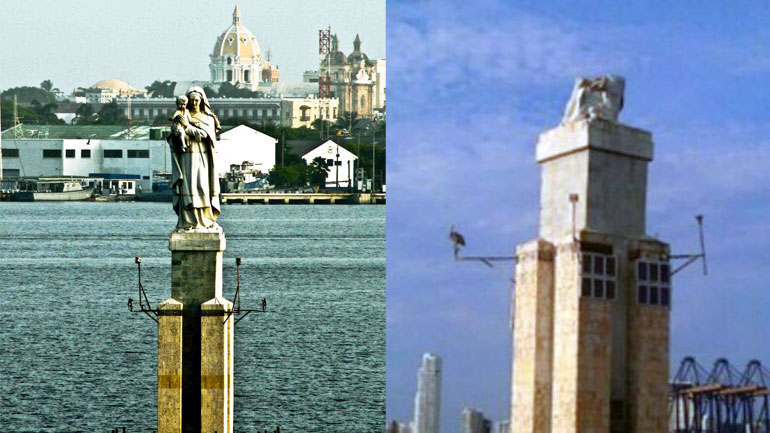 A bolt from the heavens on late Sunday tore a north Colombian Virgin Mary statue in two as passing boats had abandoned the bay allowing onlookers to watch in horror.

In the colonial port city of Cartagena on Caribbean shores, the statue was shattered by the lightening bolt, reportedly halved with the pieces thrown into the surrounding waters.

One resident reported “That was awesome, lightning struck and split the virgin from the base and fell sideways. Everyone here was impressed because at that time many boats had just passed the site, in the moment that was not a single boat nearby, it was then we saw the lightning hit.”

The statue that remembers the Virgin of Mount Carmel, the patron saint of drivers and navigators, had stood in the bay of the coastal city since its transfer in 1983. She stood as a guide through dangerous seas for the fisherman of the Catholic coastal city.

Coastal Guard boats patrolled the bay as Navy divers then took to the seabed in search of the lost parts of the statue for over an hour, finding three large pieces and several small parts. Operations have resumed on Monday to gather the remaining parts. These such pieces reportedly posing no risk to navigating boats in the area.

This is not the first time that heavenly violence destroys religious objects in Colombia: A Christ statue in the southwestern city of Cali was nearly decapitated by a lightning bolt last year.