Lighting a Fire under Coffee Culture in Colombia 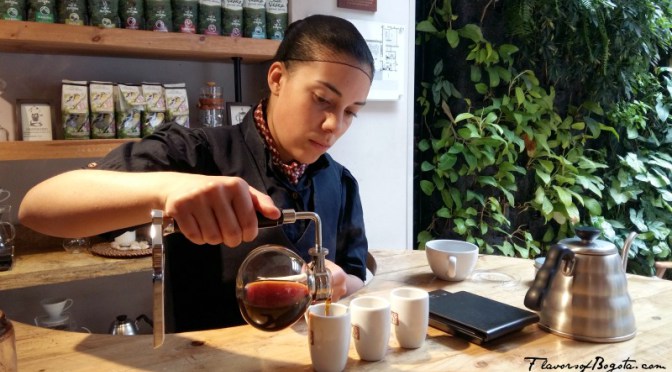 I met Karen Silva at a Juan Valdez coffee shop. She’s in her twenties. Serious. Shy. In a society that places quite a bit of emphasis on women’s physical appearance, there was no bling about her, no lipstick or flashy earrings. Her hair was caught back in a fine black net, a fashion that every other Juan Valdez employee was sporting. There wasn’t much about her that impressed me.

Until she made that coffee for us.

We just asked for a normal coffee. Well, ‘normal’ if you’re in Juan Valdez Origenes in Zona G, Bogota’s primary restaurant area. I was with a group of Americans doing my coffee shop tour and we stopped in at Origenes to talk about why Juan Valdez and the National Coffee Federation are important to Colombia. As we stood around a cupping table discussing coffee farms and wet method processing, Karen approached us. I had already asked her to prepare the coffee for us – Sierra Nevada coffee in the syphon method. It’s a fun coffee brewing method that uses fire and gravity and science.

Although we weren’t set up for a true coffee cupping, she wanted us to at least get in a good coffee tasting. Since all brewing methods vary the final coffee you get in your cup, Karen wanted us to try the coffee without any true brewing method at all. So before making our coffee in the syphon, she poured out three cups of water. In the farthest cup she put spoons, those fat deep spoons that are just right for cupping. Another cup was for rinsing the spoons. In the first cup she had dumped in just the right amount of Sierra Nevada coffee at just the right grind and she simply filled it with water. 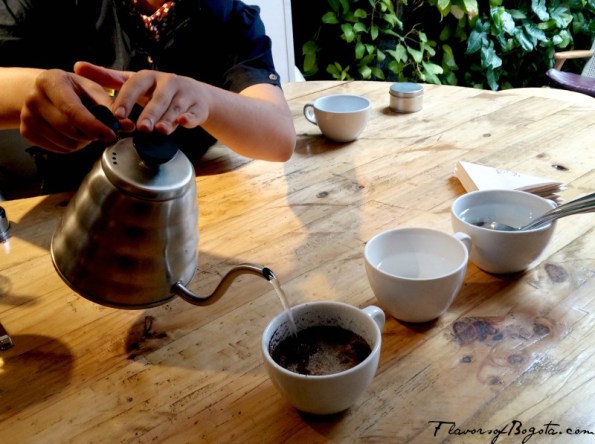 We watched the cup expectantly, and after the right amount of minutes floated by she carefully parted the waters – er, the crust (the grinds form a crust at the top of the cup) – and nodded for us to sniff and slurp in a serious coffee cupping attitude, getting all those precious drops of coffee all over our tongue and palate. This was coffee in its naked form, as I like to say – unadorned by the changes any brewing method will make in the flavor profile.

Karen asked, “So what flavors do you taste?”

Karen nodded. Sierra Nevada coffee was known for those flavors, as well as a handful of others. She talked about taste buds and taste sensations, talked about water temperature and coffee beans. She talked about farms in the mountains where indigenous people grow their coffee with deep respect for the land they work.

Then she lit the fire.

And I’m not talking about the one below the syphon brewer.

As we slurped our coffee, I asked Karen how she became a barista. That’s when a little secret smile flirted with the corners of her mouth. Ah, there was a story here.

“I started working at Juan Valdez while waiting for another job. I wasn’t that interested in coffee – I just wanted to pay the bills. But then…I discovered how amazing coffee is. I never knew that before.”

After working for some time at the store, she expressed an interest in actually making the coffee for customers. Using the espresso machine, making pour-over coffees, the serious stuff. But they didn’t let her touch the machines or the pour-over coffee brewing methods.

Really? Men’s work? To operate an espresso machine? In 2015?

Now, before you get angry at Colombia and machismo, take a moment to reflect. This male-oriented coffee culture is certainly not only seen in Latin America. Women are often overlooked in the whole coffee-to-cup chain around the world, as this interview in Sprudge highlights.

The drive to change this aspect of coffee culture is seen wherever women are working behind the machines – or want to be working behind the machines. Are women competent enough to make coffee, or should they only serve it? The Guardian asked that question and examined the situation in Australia, which makes for an interesting read into preconceptions and misconceptions in the coffee world.

Given the implications that winning a coffee competition can have on a barista’s career, it’s interesting to note that the World Barista Championship has never been won by a woman, not in the fifteen years it’s been running. (You can check out the rankings for yourself to see if there are any women’s names.)  According to this Sprudge article, there have been years when there were no women at all competing in the championships, and other years that no women made it to the semi-finals.

Here in Colombia, the recognition of female baristas at any level is hardly more advanced.

But Karen wasn’t taking no for an answer. She studied coffee on her own and then she studied coffee preparation at SENA, Colombia’s national tech school. She got ready for the challenge. And then the day came. She again asked to be put on the machines.

And they again told her no. I mean, it’s men’s work. Right?

Karen didn’t accept that. She pestered them. They caved in. She got her chance.

And she did a good job.

She did so well, she was invited to compete nationally in the Juan Valdez barista competition in 2015. She did her best, and she came in…first place. That is the first time that a woman won the championship.

Then she decided to go national and represent Juan Valdez in the 10th National Barista Championship. She came in number 8. Nationally. Against all those men.

Karen looks at us and smiles smugly as if to say, “I knew I could do this.”

Then she lit the fire underneath the syphon coffee brewer and we were off on another coffee experience. 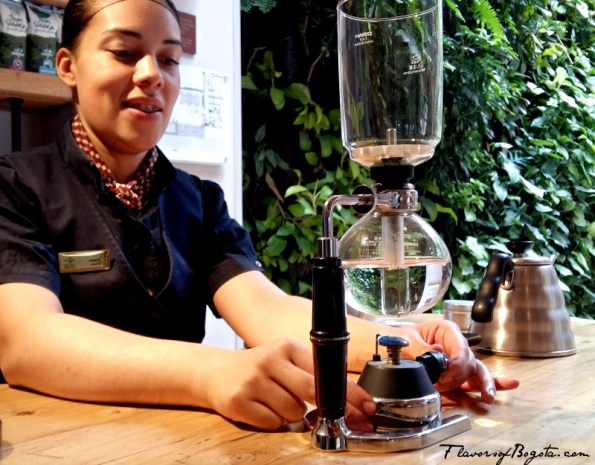 Interested in coffee culture in Colombia? Join Flavors of Bogota for our Coffee Shop Tour.