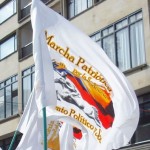 A leader of one of the leftist social movement Marcha Patriotica was assassinated in southern Colombia on Monday, according to national media reports.

Roberto Cortes was reportedly shot five times by unknown attackers early Monday morning in the presence of his son. He was still alive when he arrived at a nearby hospital in the state of Huila but died of his wounds several hours later.

According to statements made by the Marcha Patriotica, Cortes was an active organizer in the nationwide agricultural strikes and protests that gripped much of the country between July and September of this year.

MORE: 2013: The year of social protest and repression in Colombia (Pt 1)

The organization also reported that Cortes was the 25th of its leaders to be assassinated this year, drawing parallels to the Union Patriotica (UP), a leftist political party formed in the 1980s by various rebel groups and Colombia’s communist party before a wave of targeted assassinations killed most of its leaders.

The Marcha Patriotica is one of Colombia’s largest leftist social movements and is led by ex-Colombian Senator Piedad Cordoba.

The movement was formed in April 2012 and consists of more than 1,500 social and political organizations that purportedly represent the most marginalized members of Colombian society.