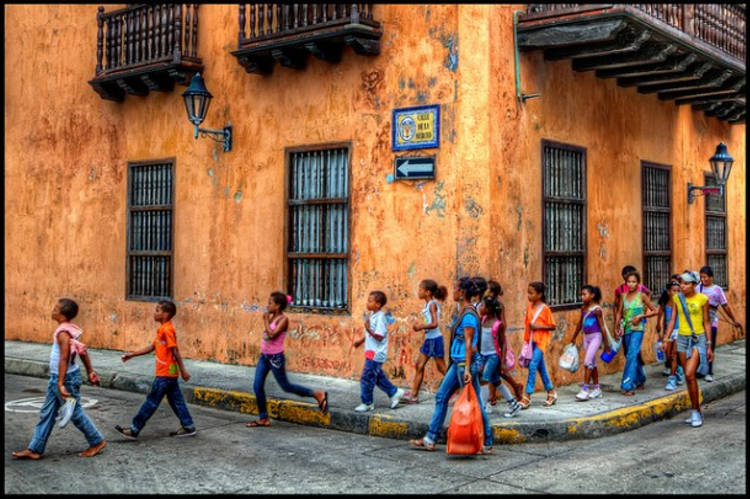 BOGOTA — What a difference a decade makes. Ten years ago, Colombia was the Greece of Latin America in the eyes of investors. Young people were desperate to emigrate. The well-off, afraid they’d be kidnapped, avoided traveling between Bogota and Medellin. When they did, it was best to travel the 240 kilometers that separate the two cities in a convoy, escorted by armed guards. And, oh yes: Colombia’s murder rate was the highest on the planet: 76 per 100,000 inhabitants.

But that was before the turnaround. This country of 45 million residents, thanks to its booming annual GDP growth of 5.5%, has recently passed Chile to boast South America’s third largest economy – after Brazil and Argentina. No one would compare it with Greece now. Colombian bonds have recently been upgraded to “investment-grade.” A decade ago they were classified as “junk.” Another positive sign is the free trade agreement (FTA) Colombia has finally managed to seal with the United States. The U.S. Congress approved the FTA a month ago, after five years of deliberations.

Colombia’s rapid growth has had positive social effects as well. Ten years ago, 50% of the country lived on less than $2 per day. Today it’s down to 37%, and unemployment, which once affected a fifth of the population, has been halved. Colombia’s infamous murder rate, furthermore, is now a third of what it was, and kidnappings are down by a factor of 12.

Perhaps nowhere is the transformation more evident than in Medellin’s Communa 13 neighborhood. A decade ago, no police officer in his right mind would dare venture into the ultra-violent neighborhood. Now, people walk around freely. It was there, in the city’s hillside barrios, that Colombian authorities first began trying to reestablish the rule of law. In October 2002, soon after President Alvaro Uribe’s arrival to power, some 3,000 soldiers – backed by tanks and helicopters – seized control of Communa 13 after five days of combat. “It’s like we took back our own country,” says one Colombian man.

A majority of Colombians credit Mr. Uribe for the turnaround. In 2006, the popular conservative was reelected. He was succeeded four years later by his defense minister, Juan Manuel Santos, who is remembered in France for receiving French-Colombian hostage and former presidential candidate Ingrid Betancourt on the military tarmac after the 2008 commando raid that freed her from her guerilla captors, the FARC.

Today, the much-diminished guerrilla army is down to about 8,000 soldiers – a fifth of what it boasted a decade ago. Earlier this month, the FARC’s top commander, Alfonso Cano, was killed. The FARC has succumbed to a Colombia army that is now much more professional thanks to the $6 billion funneled its way from the United States to fund the Plan Colombia program.

All in favor of free markets

In the meantime, Colombia – long known as a “narco-state” – has succeeded in greatly reducing its cocaine commerce. Based on satellite images, authorities estimate that coca production has been cut by nearly two-thirds since 2001, from 163,000 to 59,000 hectares. Instead of cocaine, Colombia’s star exports are now exotic fruits, flowers, nickel, coffee, textiles and chemical products, according to Maria Claudia Lacouture, president of Proexport, Colombia’s investment and tourism promotion agency.

What’s the secret to Colombia’s success? According to Standard & Poor’s, the country has benefited greatly from a general consensus that’s developed between the population and its leaders about the importance of unbridled private investment. To that, Gonzalo Restrepo, head of the local subsidiary of the Casino super market chain, adds: “the return of security, an openness to foreigners, a legal framework and fiscal stability, and guarantees provided by an independent judiciary.”

Demographics play a role as well. Roughly half the population is less than 30 years old, and they’re not only eager to leave the dark years behind, but willing to work hard to make sure that happens. Many of them are part of a new middle class that is largely driven by a desire for consumer goods. According to Restrepo, the market for products such as electronics and autos is growing by as much as 40% annually. Indeed, over the past decade, Colombia’s per capita GDP has grown from $2,000 to $6,500, allowing the country to apply for membership in the Organization for Economic Cooperation and Development.

More so than its South American neighbors, Colombia is very much in tune with the United States and has few qualms about embracing a free-market economic system. Here there are no unemployment benefits. Health insurance and pensions are obligatory, but privately run. And except for certain agricultural sectors, Colombia does little to protect its local industries, opting instead for fair trade deals. Besides its recently approved trade agreement with the United States, it also has one pending with the European Union. “Colombia plays the economic integration card,” says Edima Pereira Romero of the newspaper Dineiro.

In need of a few good highways

Colombia is failing, however, when it comes to equally distributing its newfound earnings. Evidence of that are the “recyclers” – people who eke out a living by scavenging in garbage cans, and the “red light” workers – street peddlers who sell to commuters held up by stoplights. On the other end of the spectrum are the 15% of Colombians who are considered rich or super-rich.

And violence, while it has greatly diminished, is still a problem. Foreigners who live here are encouraged to check the crime “forecast” before venturing into certain areas. They’re also encouraged to avoid certain neighborhoods in Bogota, which is nevertheless a safer city than Washington D.C.

Infrastructure is a problem as well. Colombia has neither expressways nor trains, and its only Pacific port, Buonaventura, lies in an almost lawless zone. It costs more to transport a container between Bogota and Cartagena, on the Atlantic coast, than to ship it to China or France.

Read the original article in French