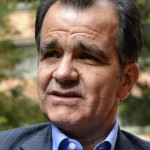 “How can we allow the heads of the FARC, who have themselves committed crimes against humanity, to receive a spot in Colombia’s congress tomorrow as a reward without spending a single day in jail?” Zuluaga asked.

“The agreement is a farce,” he said, referring to a deal announced earlier on Wednesday by Colombian officials and representatives of the FARC outlining future political participation for Colombia’s oldest rebel group.

“This agreement…is a lack of respect for…democracy in Colombia…democratic institutions, and for honest citizens who participate in civic life according to the law,” said Zuluaga in response.

The conservative presidential candidate maintained that Colombia’s government cannot engage in dialogues with a “terrorist group” such as the FARC, a position expressed by hardline “Uribista” politicians since before the start of negotiations in Havana last November.

The FARC’s record, he said, should preclude the possibility of transition into mainstream Colombian politics, citing the rebels’ history of assassinations, extortion, child recruitment and terrorism as an insurmountable boundary to political legitimacy.

According to Zuluaga, “It is not responsible to believe false illusions talking about a ceasefire when the FARC has no definitive intention of handing over its weapons.”

Zuluaga and leaders from the Uribe Centro Democratico party have been some of the most vocal political opponents of the peace talks, which they have labeled an “impunity process.”

MORE: Zuluaga strives to return Colombia from ‘failed state’ to one of ‘confidence’

Despite the widespread allegations linking him to paramilitary groups, party leader and ex-Colombian President Alvaro Uribe, in particular, has been a staunch critic any path toward amnesty or political participation for the FARC.