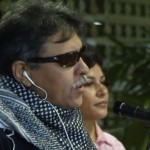 Colombia’s oldest rebel group FARC said Wednesday that the government’s refusal to integrate an “truth” commission into the ongoing peace talks is a barrier to progress.

The FARC has repeatedly called upon the government incorporate a truth commission to investigate the historical origins of Colombia’s half-century civil conflict.

“Nothing should keep us from pursuing the truth. The persistence [of the government] turning a blind eye on this urgent need has become a huge barrier to the advancement of the peace process,” the FARC’s delegation stated in the press release.

The delegation mentioned that it had requested the integration of a historical truth commission on several occasions before, stressing the need of an independent study of the history of Colombia’s more than 50-year-old armed conflict.

In the release, the FARC said the state’s role in the history of the armed conflict has not been analyzed sufficiently especially in regards to its responsibility to victim compensation

Victim compensation will be the fifth point on the peace talk agenda.

“We proposed the immediate establishment of a commission of nationals and foreigners to study the history of the confrontation since the start of violence, in order to prepare the material required to deal with the point of the dialogue’s agenda referring to the victims with more knowledge of the causes [of the armed conflict]“, said the FARC’s delegation.

One of the aims of the commission should be to analyze the role of different actors involved in the conflict, especially in regards to their responsibility for the conditions that gave rise to the rebel groups.

“[The commission] should evaluate the responsibility of governments, the media, the official church, the interventionist foreign powers (especially the United States), the landowners, entrepreneurs and the financial sector, up until this day,” said the FARC.

Colombian government and FARC delegations just entered the 17th round of negotiations in Havana, Cuba, taking up the “solution to the problem of illicit drugs” agenda point, the third of six discussion points.

If successful, the peace talks will put an end to nearly 50 years of conflict that killed more than 220,000 Colombians and left over 4 million persons displaced from their homes.