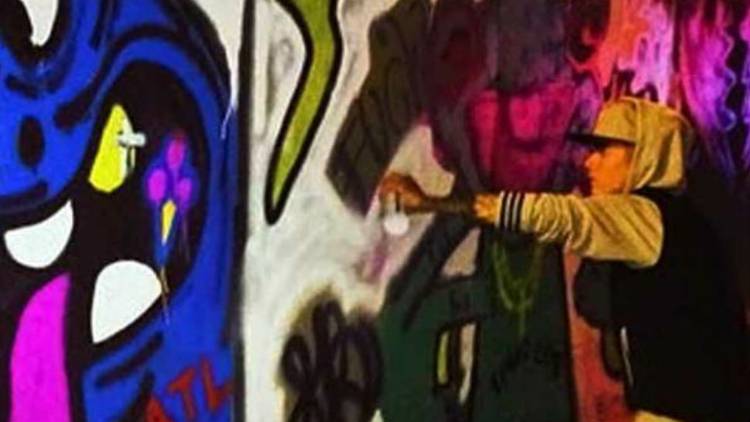 Ten days ago, when he sneaked out from his hotel to do some graffiti on a 40 meters long gray wall of 26th Street in Bogota, Colombia, Justin Bieber most probably didn’t imagine he would stir a heated debate and provoke a chain reaction, which ended up legitimizing graffiti and urban art.

Initially, the image broadcasted by Colombian media was disconcerting. In an area of the city where graffiti are banned, the image showed Justin Bieber painting a marijuana leaf and the Canadian flag, while the police provided him with security, even closing one of the busy street’s lane. To the thousands of graffiti artists around Colombia, who have been often harassed by law enforcement, the image was like a slap in the face. In fact, in August 2011, a police officer shot and killed an unarmed 16 years old kid, Diego Felice Becerra, while he was spraying graffiti in an area similar to the one where Justin Bieber did his. The autopsy report revealed that Diego Felipe was shot in the back from close range.

At first Colombian graffiti writers unleashed their frustration through the social media, venting against both the police and the young Canadian celebrity, but on second thought they realized Justin Bieber had just served them with a golden opportunity. They said: if Justin Bieber can do it, then also Colombian graffiti writers should able to spray with colors and art the city’s gray walls, and if the police protected Justin Bieber, then they should protect graffiti writers as well, instead of harassing them, of confiscating their sprays, of jailing them, of killing them, as it happened with Diego Felipe Becerra.

The image of Justin Bieber spraying graffiti put the Colombian police in an awkward position. They could no longer sustain a double moral they have been practicing without much embarrassment: one for the privileged and one for everyone else. Following the incident and responding to the country’s outrage, the head of the Colombian police, general Rodolfo Palomino, spoke of graffiti as a positive art that expresses “emotions and motivation”, and of the need for society and the police to evolve.

Motivated by what Justin Bieber had set in motions, Colombian graffiti writers have taken action. In Bogota, without no permission in their hand, 300 artists came from nowhere and from everywhere and occupied the area where Justin Bieber had sprayed his graffiti, and during 24 hours wrote more than 700 graffiti. “Justin Bieber was the cause for all of this to happen. The poor dude had no idea what he sparked,” said one of the young graffiti writers. Don Popo, a pioneer of hip hop in Colombia and who has been working on marginalized youth empowerment for 25 years, commented:

We worked until dawn, giving our bodies and souls. We worked with discipline, devotion and energy, sharing our little money to complete a work that can never be taken away. Because of what Justin Bieber sparked, we became aware of ourselves, of the fact that we are a movement; we became aware of our own rights”

The initiative of graffiti writers in Bogotá spread like fire to other major cities across Colombia, setting on fire the spirits and the motivations of dozens and dozens of graffiti writers. Last weekend in Medellin, more than 70 graffiti writers occupied a main street and sprayed for 24 hours. Today, it was the turn of almost hundreds artists in Cali, one of the most violent cities in the world. And now, they are organizing in other Colombian cities, like Pasto, Manizales, Bucaramanga, etc. It’s what I have come to call the Justin Bieber snowball effect.

In Bogota, Medellin and Cali, the police arrived, sometimes threatening the graffiti writers to confiscate their sprays, but when reminded that law enforcement had allowed Justin Bieber to spray and had even protected him, they desisted and in some cases even helped the dozens of graffiti writers, despite the fact that they were spring in forbidden areas.

In a creative and nonviolent manner, graffiti artists in Colombia educated all of us about the essence of graffiti art: to be an act of resistance and defiance, which affirms the will to redefine public space as a space of inclusion, participation, and engagement.

In Bogota, the parents of the assassinated young graffiti writer went to greet the participants in the event. There were tears and deep commotion when they showed up. “Our son was one of you,” said the mother, “his death was very painful, but if the purpose behind this tragedy is to create a more tolerant society and to legitimize graffiti as an art, then Felipe from heaven will be satisfied.”