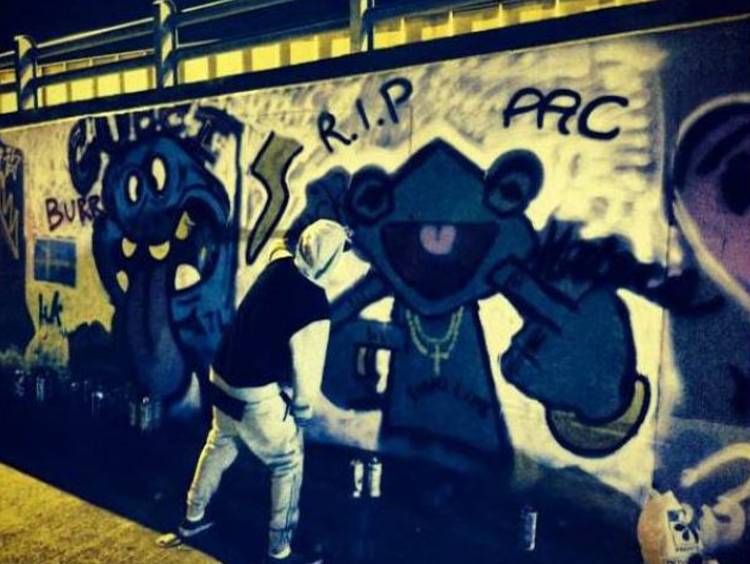 On his way down Calle 26, Bieber stopped his caravan of armored SUVs, pulled out spray cans and painted graffitis onto the northern wall of an underpass near the Bogotá City Council building. While Bieber and several companions spray painted, the singer’s four bodyguards and several police car escorts waited and watched.

Bieber may be no Banksy, but his artwork drew attention when a CityTV van appeared and started filming. A police officer and a bodyguard approached the TV crew and ordered them, in English, to stop filming – which they refused to do. Bieber and company continued painting anyway.

Painting on public walls without a permit is a minor crime here, so it struck many as strange that the police protected Bieber while he did it. The family of Diego Becerra, a graffiti artist who was discovered painting a north Bogotá wall in 2011 and chased down and shot dead by police found the contrast unfair.

Becerro’s father, Gustavo Trejos, called for “more fairness” and for graffiti artists to be respected and permitted to make their art.

“In this city there are continuous abuses,” Trejos told El Tiempo. “They see (the grafiteros), they take them to the police station, they hit them and in extreme cases such as our son, they are assassinated.”

A city official called Bieber’s paintings “in bad taste and illegal,” and said the city would have given him permission if he’d only requested it. But if Bieber returns to Bogotá, city officials said, he’ll have to to public service work to pay for his crime.

But officials might not have approved of all of Bieber’s images, which included a frog and what looks like a marijuana leaf.

By this afternoon, other grafiteros – who are apparently not Bielebers – had already erased and painted over Bieber’s work.

This wasn’t Bieber’s only controversy in Bogotá. El Espectador reported that he later stopped at a Chapinero nightclub and that seven apparent prostitutes were seen getting into one of his SUVs.