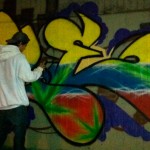 Indignation is not one of the emotions Justin Bieber typically inspires in the general public. And yet, in his recent visit to Colombia, the Canadian pop star inadvertently set off a series of protests still sweeping the country.

Bieber made headlines two weeks ago when a police unit from the city of Bogota escorted him and several friends on a nighttime graffiti run in the Colombian capital.

News cameras captured the international pop sensation and his entourage as they spray-painted some 130 feet of wall under a Bogota highway tunnel, and the incident inspired widespread public backlash, particularly from a graffiti community still upset over the death of 16-year-old Diego Felipe Becerra in 2011.

Becerra was spray-painting under a bridge similar to the one Bieber left his mark on when he was shot in the head by city police, reportedly from behind and at close range.

At the time, Becerra’s killing prompted a national scandal and an investigation that has still yet to result in a conviction or verdict of any kind.

But two years later, the image of a foreigner being aided by police in an activity historically persecuted by public authorities has led to a more focused response than the 2011 incident.

Over the past two weeks, “tomas grafiteras” — graffiti takeovers — have been organized by artists and community activists across Colombia calling for an end to the taboo traditionally associated with the urban artform.

A spontaneous protest in Bogota drew as many as 300 graffiti artists and left 700 pieces along the walls of the tunnel Bieber had “tagged” a few nights earlier.

In Medellin, Colombia’s second largest city, a similar 24-hour occupation of one of the city’s main traffic routes brought local “crews” together to showcase their art.

Unlike its Bogota progenitor, the Medellin event was registered with local authorities ahead of time. In an interview with Colombia Reports, Laura Cisneros said that the purpose of the takeover was to “show solidarity in front of the ongoing stigmatization and repression of a vital artform and provide a space for Medellin’s artists to congregate and establish connections.”

Cisneros, a lawyer and director of the Graffiti De La 5 cultural group, explained that “graffiti is a legitimate, vibrant artform like any other. Like music, like poetry, and of course, like any art you can find in a museum. But for a number of reasons — the biggest being the demographic that practices it — graffiti has always been persecuted and neglected by society, and still is in the present day.”

As a lawyer in employ of the Medellin city government, Cisneros believes that the legal basis for prohibiting “free expression” in public areas is “very weak.”

But more importantly, she said, banning graffiti in urban areas ruins one of the best opportunities to engage at-risk young people.

“In [Colombia’s] cities, there are tremendous problems with poverty — there is homelessness, there is crime and prostitution and drugs, and it’s everywhere. And rather than encourage young people living in these situations to express themselves in a productive manner, to involve themselves in a creative and supportive community, we chase them off of our streets and beat them. For what? So they can go join the gangs?”

Cisneros said that the administration of current Medellin Mayor Anibal Gaviria has taken promising steps to support graffiti culture, including allotting funds for public works and promotional materials, but progress is “slow and difficult.”

“It’s not just the law you have to deal with, or the police. It’s the people, too. It’s an entire attitude that has to be changed,” she said.

If Colombia can make that turnaround, though, Cisneros believes it will have created a powerful new outlet in its continuing struggles with urban violence.

“In our cities, we have programs targeting the youth. But they’re for sports, sports, always sports. Sports is always the answer. But not everyone is captivated by sports. Graffiti is one of the few true urban artforms. And aside from touching the lives of our youth, it has the potential to change the communities themselves. To bring beauty and pride to these places that experience so much misery.”

On Monday, graffiti protests kicked off in Cali, Colombia’s third largest city. And takeovers are already planned for a number of other urban centers across the country over the course of the next two weeks.

“This is a huge step for the culture,” said Cisneros. “We’ve never seen this level of communication and support between the various scenes. Hopefully we can build on this and turn it into something bigger.”