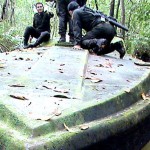 Colombia’s police on Tuesday reported the discovery a forty-foot boat that can travel a few meters beneath the water with the capacity to hold six tons of cocaine.  The boat was found in a rural part of the southwestern state of Nariño.

“The boat was going to be sent toward Central America holding a cargo of approximately six tons of hydrochloric-preserved cocaine,” reported the police.

The members of the police that found the boat were greeted with gunshots upon arrival in a confrontation with the owners.  The police believe that they were members of Colombia’s largest rebel group, the FARC, according to newspaper El Pais.

Information and clues from informants led to the ultimate successful capture of the boat.

“The boat was equipped with radar, sonar, electric power, air conditioning, and contained an automatic navigation system that could last for six days with four passengers,” said Rodolfo Palomino, director of the National Police.

In addition, the marine drug carrier was made of fiber glass and steel, had a GPS system, a gyroscope, and a huge diesel motor.

The boat has an estimated worth of about $1.5 million.

Since 1993, 81 types of these vehicles have been captured in Colombia.