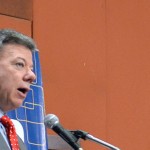 President Juan Manuel Santos said Thursday that time has come for Colombia to reconcile amid peace talks with the country’s largest rebel group, the FARC.

Speaking at a charity banquet, Santos said “it is time for reconciliation. Let this be our message and call.”

“Real peace is not built over the ashes of the dead, over the wounds of confrontation, over the blood of those who have fallen,” Santos added.

Instead, the president stressed the necessity to “look for consensus where there were only differences, to look for unity where there was only division, to tolerate and to comprehend that we are different and can live together without killing each other over our ideas.”

To stress the necessity to forgive, the president asked Colombians for forgiveness for mistakes made by him.

“I myself — today — ask for forgiveness to all I have offended. I ask forgiveness for the mistakes  I have certainly made as leader. And I do this in all humility because we are all human,” Santos said.

At the same time, Santos said he forgave “those who attack or offend me, because I am convinced that Colombia will only be just, equal and kind-hearted if we, each one of us, put ourselves to clean our hearts of hatred and bitterness.”

Santos, less than a year away from elections during which he hopes to be reelected, began peace talks with the FARC in November 2012. The talks that seek to end nearly 50 years of violence between the state and the FARC guerrillas are perceived with skepticism in Colombia that has been involved in an internal armed conflict since 1964.