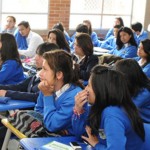 The findings of the 2012 Program for International Student Assessment (PISA) were presented this Tuesday in London, and the results were not promising for Colombia’s education system.

Out of 65 countries measured ranked in the study, Colombia came in 65th, a marked step back even from its worrying position after the last series of examinations.

The PISA tests are carried out every three years by the Organization for Economic Co-operation and Development (OECD) and purport to measure the educational level of 80% of the world’s population.

The yests, which use the 15-year-old age group as a representative sample, are spread across the fields of mathematics, language and science, assessing the students’ theoretical understanding as well as the practical application of their studies.

According to a representative of the OECD, “it measures what the students know and what they can do with their knowledge.”

Colombia placed 58th in the 2009 PISA, and in the time since, the country’s results have worsened in all three fields. In the 2012 assessment, Colombia dropped four places, sitting ahead of only Qatar, Indonesia and Peru within the countries measured.

The PISA report did reveal some positive trends in the country, such as its efforts to improve the information infrastructure of its education system to better identify and support struggling students and schools.

The report also mentioned Colombia among the countries that had established substantive policies to improve the quality of its teaching staff.

One highlight for the South American country was the overall satisfaction of students with their social status in school, with more than 90% reporting to be happy in their educational setting.

Nevertheless, the academic statistic still undermine the government’s stated goal of improving the access, quality and relevance of education in Colombia, a commentary confirmed by the discouraging results of recent national surveys.

According to an annual report by the National Council of Competitiveness, released in 2012, one out of three children between ages five and six are not enrolled in any kind of educative institution, while only four out of ten adolescents in the 15-17 age range go to school, especially in rural areas.

Entrepreneurs and economic experts have identified improving education as a necessary step for Colombia’s economic growth. The country is seeking to become one of the three most competitive countries of Latin America by 2032, but continues to face harsh criticisms from its teachers, who went on strike earlier this summer protesting unpaid wages and benefits.