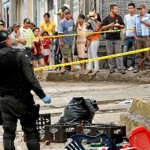 The Inspector General’s Office issued a warning on Monday about the insecurity situation in Colombia’s central state of Boyaca due to escalating violence among rival emerald-mining families in the region.

The Inspector General called on local police to strengthen security measures in the region to restore and preserve public order after fears were sparked earlier in November of a return to violence experienced during the decades-long “Green War.”

On Monday the governor of the Boyaca department was summoned by the Inspector General to set up guidelines for local authorities in order to guarantee social stability in the region.

At the same time, the Inspector General asked the Ministry of Interior for support of “the management of public order, security and peaceful coexistence,” in the zone.

This support should result in coordinated actions with local authorities and community representatives in order to establish peace and coexistence in the region, according to a notification.

Started in 1961, the Green War was fought by the area’s largest mining families, who recruited private paramilitary armies to fight turf battles and quash worker uprisings. Violence reached a peak during the mid-1980s, when various drug cartels became embroiled in the conflict.

The region has remained relatively calm since a tentative peace was brokered by the Catholic Church during the early 1990s, but with the recent death of Colombia’s unofficial “Emerald Czar” and an attack on his apparent successor, the situation has once again grown tense.