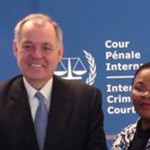 Colombia’s inspector general asked the chief prosecutor and the vice-president of the International Criminal Court to intervene if his government grants impunity to rebel group FARC in the event of a peace deal with the guerrilla group.

While on a visit to the court’s office in The Hague, Netherlands, Inspector General Alejandro Ordoñez expressed his concerns “over the possibility that an eventual peace accord between the government of Colombia and the FARC guerrillas is based exclusively on restorative justice (truth and reparation), leaving criminal justice out,” the Inspector General’s Office said in a press statement.

According to Ordoñez’ office, “this would mean impunity, a not sustainable peace [that] could stimulate later acts of violence in the country.”

International law obligates countries who ratified the Rome Statute to prosecute alleged perpetrators of war crimes and crimes against humanity. In the event a country fails or refuses to do so, the court is allowed to prosecute these suspects.

MORE: FARC’s most serious crimes must not go unpunished: ICC

While President Juan Manuel Santos has persisted in claims the FARC will be submitted to transitional justice and will not be enjoying impunity for crimes committed during the conflict, the guerrillas themselves have insisted they will not be going to jail in the event of a peace deal.

MORE: We will not go to prison: FARC Secretariat

The group has been fighting the Colombian state since 1964. The violence related to the almost 50-year armed conflict has left at least 220,000 Colombians dead, while guerrillas, paramilitaries and the armed forces alike additionally have committed tens of thousands of human rights violations.