Inside The FARC Plot To Kill Arch-Enemy Uribe 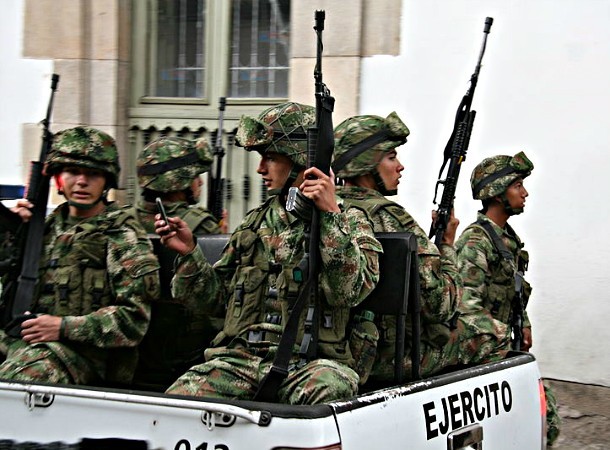 Members of the Military Police of Colombia

(WORLD CRUNCH) BOGOTA — Two policemen who infiltrated the Sixth Front of the Revolutionary Armed Forces of Colombia (FARC) in the country’s southwestern Cauca region managed to provide vital clues that helped foil an imminent attempt to kill the former president Álvaro Uribe and the head of the state prosecution service Eduardo Montealegre Lynett.

The stunning news comes as FARC leaders negotiate in Havana with the government in a bid to end decades of conflict in Colombia. Uribe, president from 2002 to 2010, has bitterly criticized the talks, while Montealegre Lynett’s Prosecution Service may have obtained ample evidence of a range of recent illegal activities by the FARC.

The investigations that led to this week’s revelations began last April when state forces captured 17 members of the FARC’s Sixth Front. Several of those detained revealed information on possible attacks on political leaders, but with few details.

El Espectador has learned that soon after, Colombia’s police forces ordered a successful infiltration operation. Two policemen sent accessed confidential information, which they reported back to Bogotá, including evidence of links between one of the Front’s units, the Teófilo Forero Mobile Column, and various drug-trafficking outfits and loan sharks in western Colombia. The scenario was almost a perfect copy of the failed 2012 plot to kill Colombia’s former Interior Minister Fernando Londoño.

The undercover policeman, however, were caught by FARC, who killed them in Caquetá in southern Colombia. The information they had obtained was in any case already included in an extensive intelligence report that would help focus the investigation.

They call him “El Paisa”

Police subsequently ordered several phone lines tapped, while informants identified the man behind the emerging plot as the head of the Teófilo Forero column Hernán Darío Velásquez, dubbed “El Paisa.” They cited the names of other guerrillas of the Southern Block, Sixth Front and the Teófilo unit active in this part of Colombia, including sharpshooters and bomb-makers.

Authorities are certain the FARC routed cash that reached an extortion racket in the southwestern city of Cali, to pay for the carrying out of the attack against Uribe. Police and prosecutors say they have precise information on this payment, and above all, the precedent of the Londoño plot. They believe that the FARC and drug gangs were collaborating on this double assassination project, noting that plans to kill Uribe were far more advanced than those against chief prosecutor Montealegre Lynett.

On Nov. 12, police launched operations against the rackets in Valle de Cauca, while the military bombed El Paisa’s camp in jungle areas in southern Colombia. Computers found there were sent for analysis by technicians of the Police and the Prosecution Service. The PCs apparently had data on other FARC plots and a list of parliamentarians for possible kidnapping.

El Paisa, a former gunman for the Medellín Cartel, has been a target of the authorities for over a decade now. This FARC captain has turned out to be more ruthless than the notorious “Mono Jojoy,” the FARC military commander shot in 2010.  The list of his purported crimes includes the attempted kidnapping and killing in 2006 of Liliana Gaviria, sister of the former president César Gaviria, the murder of the governor of Caquetá Luis Francisco Cuellar and the 2003 bomb attack on the El Nogal club that killed 36 and injured 185 people.

A recent intelligence report indicated the FARC’s secretariat may have lost control of its terrorist arm.

About this article source Website: http://www.elespectador.com/
The oldest newspaper in Colombia, El Espectador was founded in 1887. The national daily newspaper has historically taken a firm stance against drug trafficking and in defense of freedom of the press. In 1986, the director of El Espectador was assassinated by gunmen hired by Pablo Escobar. The majority share-holder of the paper is Julio Mario Santo Domingo, a Colombian businessman named by Forbes magazine as one of the wealthiest men in the world in 2011.