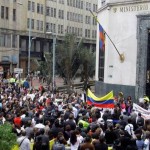 Colombia’s competitiveness against other nations has stayed the same over the past four years, at position 69 out of 133 countries, according to a “confidence” report released by the government on Thursday.

According to the report, government organizations such as the Judicial Branch and Congress require “great corrections” in their  institutional base to increase the competitive growth potential of Colombia.

The report also notes that the country’s infrastructure “straggles” behind other countries, but it does mention government plans that are starting to set improvement.

In education, the reports said, “despite effort to improve quality, coverage, and educational relevance, the country still faces great problems.”

The report did mention macroeconomic gains as increased investment entered the country. It also heralded the increase in technology use as internet service makes further inroads.

The report expected Colombia to increase innovation, with a high value export market, placing the country as the third most competitive country in Latin America by 2032.