Inflation in Colombia during October lowest in last decade 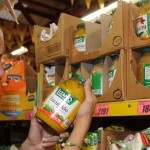 Inflation in Colombia was down 0.26% in October, according to numbers released by the country’s government statistics office, making last month the lowest inflation measure in the past 10 years.

The National Administrative Department of Statistics (DANE) also reported that inflation was 0.42% lower than where it stood during the same month of last year.

According to DANE, there were two important areas where overall prices had dropped: food which had an overall 1% decrease and leisure activities which decreased by 0.32%.

It showed drops in specific food stuffs such as a 5.86 % decrease in the price of vegetables and legumes, and 3.9% in the cost of fruit.

Cali, Colombia”s third largest city, was reported as having the the highest negative inflation at -0.70 %, while the Caribbean island state of San Andres reported the highest inflation with 0.16 %.

The report showed that in the last twelve months between November 2012 and October 2013, the CPI shows an inflation rate of 1.84%.

The news will be welcomed by Colombia’s Central Bank which has been attempting to pursue an expansionary monetary policy while keeping inflation low.