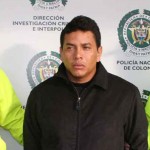 A former mid-level commander of neo-paramilitary group “Los Urabeños” was convicted on Wednesday of charges relating to his attempt to fake his own death.

A Bogota judge sentenced the neo-paramilitary to four years in prison and also imposed a $45,000 fine.

The Prosecutor General’s Office asked the judge to give the defendant the benefit of a reduction in sentence of up to 50 percent on the grounds that Torres had accepted the charges.

According to the forged documents, Torres “died” of natural causes in Bogota in 2010. However, when he was captured in 2012 it became clear his death was a hoax.

Colombia’s supreme court later said that it was “unquestionable that the person captured … is not only alive, but is also the same who is wanted by the government of the United States … it becomes impermissible to assume, like [the defense] proposes, that a ‘dead [person]’ is being processed [when] the summoned Torres Matinez has not died.”

Fritanga was captured on a Caribbean island just off Colombia’s northern coast.

Authorities raided his own wedding in a high-profile operation by the Colombian police force. The lavish party was said to have had guests from around the world including three U.S. police officers and featured performances from celebrity singers Silvestre Dangond and Jean Carlos Centeno.

Fritanga is currently incarcerated in the United States after being extradited on drug-trafficking charges.

MORE: Colombia neo-paramilitary to be extradited to the US