The climate of excitement for Petro's presidency does not cheer the Nasa del Cauca peasant communities much. Between narcos, the army and the guerrillas, they have had to learn how to defend themselves and survive on the land.

QCOLOMBIA (IlManifesto) Cauca is the cradle of the culture of the original Nasa people in Colombia, an Andean region that has been and continues to be the scene of bloody conflicts: from the resistance against the Spanish led by the indigenous heroine Gaitana to the current firefights between dissident Farc-Ep cells and the armed forces. 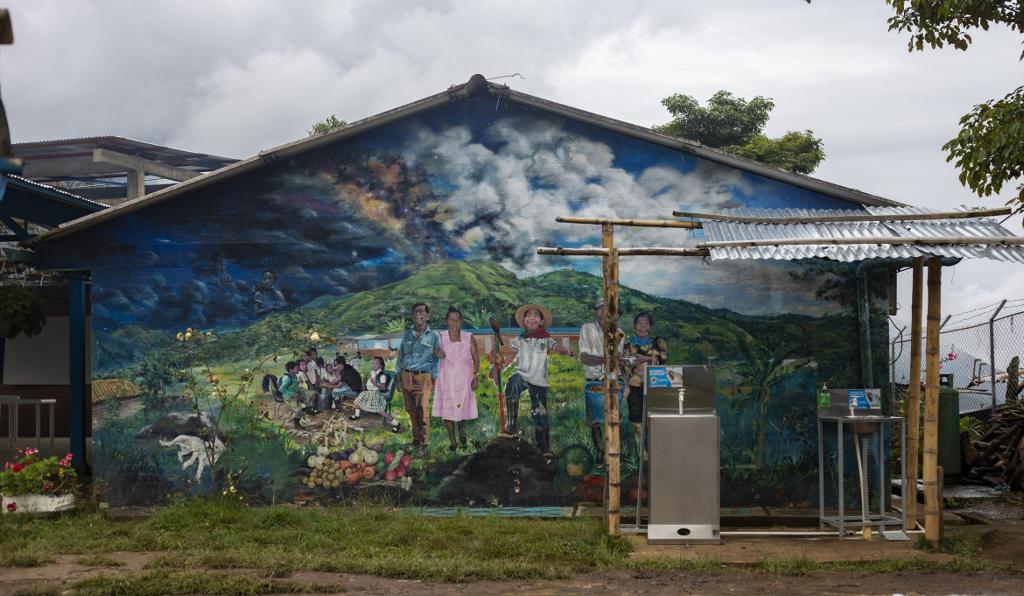 In the northern Cauca municipality of Caloto, we find Abel Coicué, a Nasa comunero and former leader of the Huellas resguardo, a partially autonomous territory run by indigenous communities. His self-built house is surrounded by banana trees, coffee and yucca plants, myriad scents, a meadow where a cow is grazing, some poultry, several dogs and songbirds that offer a backdrop to his words.

Before, all this used to be covered with sugarcane fields, Abel recounts – the intensive agriculture of landowners who have historically dominated the region by exploiting indigenous and Afro-Colombian labor and destroying the tropical ecosystem. Abel was instrumental in establishing the local “communication fabric”: “We were doing work to raise awareness through radio, web, video and print media. This led to a number of problems for us with the state and armed groups, because we were giving visibility to what was happening on the ground. We had problems with our own organization too, because whenever leaders were making mistakes, we were making them public through our channels.”

Abel’s radio activism was as part of ACIN, the Asociación de Cabildos Indígenas del Norte del Cauca, which in turn continued the work of CRIC, the Regional Indigenous Council of Cauca, founded in 1971 with the slogan “Unity, Land, Culture and Autonomy,” a pioneering initiative in Latin America’s indigenous movement and an example of grassroots self-organization involving 84 resguardos belonging to 8 original peoples.

Abel had to leave his land and family for several months and go into exile in Spain when his safety was endangered by threats from the armed groups clashing nearby. Now that he is back home, he would be entitled to protective service offered by the state institutions, but instead of the very expensive armored vehicles of the authorities, he prefers the company of a young man from the community who follows him on his motorcycle, unarmed, when he travels among the resguardos of the region.

Along the curves and steep slopes of the central mountain range that runs through Caloto, one can see the initials of the Farc-Ep “Dagoberto Ramos” dissident cell painted on buildings, and a few hundred meters away one can see painted the red-green flags of the CRIC Indigenous Guard.

The Guard is a self-defense organization of CRIC’s member indigenous communities. Those on guard duty have no firearms, but wield the traditional cane that gives them authority and legitimacy. Their job is to summon the community in case of danger, to stop the entry of paramilitary groups and drug traffickers. Dissident guerrilla cells, which engage in drug trafficking and vie for territorial control in this area, have repeatedly engaged in attacks and murders against the Guard.

After one goes past the signs left by the Farc guerrillas, one finds the “El Credo” rural school. Here, boys and girls learn to do math while caring for the land and animals, being taught to play a musical instrument and prepare feed for the farm. During times of heightened conflict, the building becomes a refuge for the entire community, who lock themselves in the school for days, weeks, or even months while shooting is taking place outside. At the entrance to the school is a mural depicting the community spirit that guides the educational activities.

Between the blue painted clouds is a portrait of a little girl, Maryi Vanessa, Abel’s daughter, killed by an explosive device during a clash between the guerrillas and the army.

Behind Abel, the sun sets and night falls on the surrounding mountains. The lights that come on in the distance remind one of the lights of a small hamlet, but these are actually the crops of Toribio, also known as the Ciudad Perdida (“Lost City”), where the marijuana business has become a part of everyday life, guided tours of the marijuana fields are being organized, and the plants are stimulated even at night with artificial lights visible from across the valley. Business is flourishing under the watchful eyes of the army base that stands a few kilometers away. Illegal plantations of marijuana and coca have been sprouting up for years now among the various parties clashing with each other in the area. And they have also spread to the resguardos.

According to Abel, “drug trafficking has been one of the most difficult problems we have had to face as an indigenous organization.” The illegal crops are a source of income for families, while at the same time the social fabric is “breaking down, nowadays people have more money and become individualistic, they start thinking only about themselves and no longer as a collective. They don’t attend meetings and they don’t go to the assemblies.”

In addition, the infiltration of narcos into indigenous communities is bolstering both criminal groups and the military and police forces that control the area.

Young people prefer the easy money offered by the substance dealers, which is why many of them stop studying or working to engage in the illegal business. “When the leadership of our organization decides to take decisive action against this problem, then the guerrillas come in and threaten and assassinate us,” comments Abel. “However, we still live here, and we must draw lessons from this situation to understand what strategy we should use and what we should do.”

Among the practices put in place by Caloto communities is what is known as the “Liberation of Mother Earth”: the conversion of acres of cañaverales, the reedbeds planted by agrofuel companies, into land suitable for agriculture and livestock. Community members ride their motorcycles with machetes, hoes, wooden stakes and wire to mark out the cleared land. They move ahead in perfect synchronicity, doing this collective work that in the indigenous tradition of the Andean area is called the “Minga.” According to Abel, the Liberation of Mother Earth brings together the legacy of native peoples’ resistance to colonization and the long history of land reclamation during the 20th century with indigenous communities as its protagonists.

The collective work day concludes with a community meeting and dinner, on a piece of liberated land which now sports fruit trees and a small lake. On the liberated lands, it is forbidden to grow coca or marijuana; what is planted is for the needs of the community and not for buying and selling on the market. During the community meeting, a candidate for the general election shows up to campaign. He is a member of the Afro-Colombian community, which represents about one-fifth of Cauca’s population. The peasants of Caloto don’t have much faith in the electoral processes. Although there is a climate of great hope among the Colombian people, with the victory of progressive leader Gustavo Petro, Abel sees a risk for community organizations: “They are offering us many welfarist projects that are certainly useful for our people; however, they are tying us down politically. The government says: if you go out and protest, we will take away your subsidies.”

The buy-in of the community leaders has meant that “today, the interest in defending life is being lost. Before, when they killed a communero, a huge number of people would take to the streets to bring those responsible to justice. Today, when they kill a leader, at most we block a road or do something symbolic, but this is meaningless because we already know who the killers are. Our leadership is not trying hard enough and is making moves only at the diplomatic level.”

According to Abel, Cauca’s indigenous organizations, which are famous throughout the country for being able to mobilize thousands of people and put the government of the day on notice, are not looking critically at this process of capture by institutions, which is a potentially successful strategy for breaking the autonomy of communities and assimilating Nasa identity within the dynamics of corrupt state institutions.

Standing against the government’s attempt at control, attacks by various armed groups and the encroachment of multinational corporations, which want to extract minerals and exploit water sources, the peasant communities of Cauca want to start anew with Mother Earth, freeing her from intensive production in order to “bring back life, animals, trees, and recreate an ecosystem in which every living being can live.”

Read the original at Ilmanifesto.it