Analysts say the rebels know they’ve been largely defeated on the battlefield. But the government faces the challenge of demobilizing some 20,000 fighters and finding a place for them. 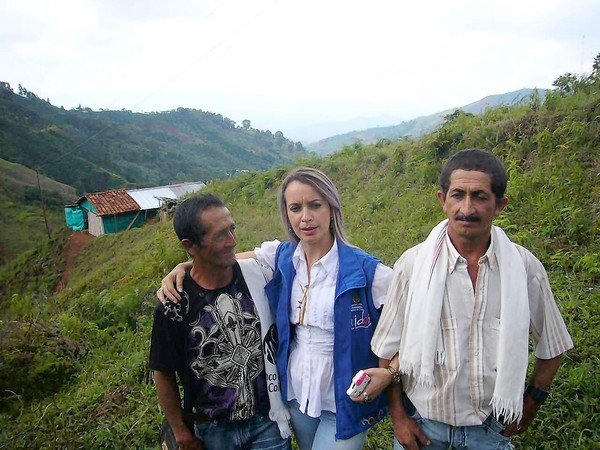 Juan Manuel Ospina, left, formerly with the Revolutionary Armed Forces of Colombia, got help from
Liliana Gallego, center, in joining a farming program to help reintegrate into society. At right is Ospina’s
brother Wilson, himself a former paramilitary fighter. (Chris Kraul / For the Los Angeles Times

TRUJILLO, Colombia (Los Angeles Times) — The 11,000 coffee bushes clinging to the steep slopes of his 10-acre farm represent nothing less than a miracle to former rebel Jose Manuel Ospina, and a sign of the stiff challenges facing Colombia’s new effort to end half a century of civil war.

Ospina and his son were members of the 21st Front of the leftist Revolutionary Armed Forces of Colombia, or FARC, which has been at war with the government for 48 years. The two laid down their arms in 2005 and enrolled in a program to bring them back into the mainstream of society.

Now Ospina farms side by side with eight other demobilized rebels and 29 right-wing ex-paramilitary members. Among those former paramilitary fighters is his brother Wilson, who gave up the fight in 2006.

“All my life I’ve been stepped on,” Ospina said, surveying his spread with satisfaction. “I never expected anything to be given to me. Now I have this.”

There is broad optimism in Colombia as the government prepares to embark on peace talks with the FARC this month in Oslo, the first since a three-year effort collapsed a decade ago. Analysts say rebels know that they’ve been largely defeated on the battlefield. And the government knows it needs a formal peace deal to help secure the country’s rapid economic growth.

But Ospina’s story is all too rare in Colombia. That’s a cause for worry as the government faces the possibility of having to demobilize at least 20,000 rebels and their supporters, and find a place for them in society.

“The main challenge we face is these people are highly stigmatized in Colombian society. After five decades of violence, most people have been touched by the violence, and they blame these guys,” said a high-ranking Colombian official, who spoke on condition of anonymity. “Colombians want these fighters to come out of the war, but they don’t want them to come to them.”

Of the 54,000 rebels and right-wing paramilitary combatants demobilized over the last decade, nearly two-thirds are still receiving government assistance. They need an average of 6 1/2 years after giving up arms to achieve some degree of independence, and are at risk of being recruited by one of Colombia’s many drug-trafficking gangs if they have no alternative.

One of the reasons for the glacial pace of reintegration is that employers aren’t stepping up with job offers, said the official.

“Coca-Cola, the supermarket chain Exito and Renault are big hirers,” the official said. “But quite frankly it’s not enough. We have a long way to go.”

Employers have cause to be wary: The demobilized fighters have a violent past and few job skills. Business owners or their family members may have been victims of kidnappings, killings or extortion.

Ospina, who joined the guerrillas after paramilitary bands chased him off the family farm in Cauca Valley province, got his chance to start over only because of the tenacity of Liliana Gallego.

Gallego, a teacher, took up the cause of resettling rebels, paramilitary fighters and displaced families to honor the memory of her two brothers, who were killed by suspected right-wing militias in 2001 and 2002.

Former fighters have reason to be cautious, too. Cesar Florez, a demobilized former paramilitary fighter, and 24 other ex-militia members tried to launch a fish farm in rural Cesar state but gave up in 2008 after criminal bands killed two of his comrades for refusing to join their gangs.

“The first killing was a message we tried not paying attention to,” said Florez, 39, who was interviewed in a Bogota center run by the government’s Colombian Reintegration Agency. “After the second message, we gave up.”

He now makes a living in Bogota selling macrame handcrafts.

Still, the hope for peace is particularly strong this time, starting with the talks that are planned to begin Oct. 15 in Oslo. In announcing the talks, President Juan Manuel Santos said the process would be limited to “months, not years.”

The rebels have suffered enormous losses through desertions and battlefield reversals over the last decade, thanks in large part to the get-tough policies of former President Alvaro Uribe and $8 billion in aid from the United States.

“They now know they will never win militarily,” said former rebel Leon Valencia, who is now director of a Bogota think tank studying peace issues. “They have lost the dream of triumph.”